By day, the park rings with the sound of children’s excited laughter. But in the early hours of the morning, the isolated playground is cloaked in shadows – the perfect hiding place to conceal a brutal murder.

When London journalist, Mark Roberts, is found battered to death, the police quickly arrest petty thief, Nick Connor. Criminal defence lawyer, Dan Grant, along with investigator Jayne Brett, are called to represent him – but with bloody footprints and a stolen wallet linking him to the scene, this is one case they’re unlikely to win. END_OF_DOCUMENT_TOKEN_TO_BE_REPLACED

When Lizzie Barnsley is murdered along a canal after escaping her abusive boyfriend, Dan Grant is called in to represent her alleged killer, Peter Box. The evidence is strong, but did he actually do it? He didn’t know Lizzie, so why would he kill her?

As Dan and his investigator, Jayne Brett, begin their case, they discover a number of murders and disappearances along the canals, including the brutal killing of fourteen-year-old Rosie Smith ten years earlier. Rosie’s stepfather Sean had been accused of her murder, but then Dan finds out that Peter tried to confess to that crime as well and was ignored.

With a client who won’t tell anyone what really happened, Dan and Jayne have their work cut out, but when it becomes clear that Peter Box can’t have been involved in every murder and disappearance, they realise that they may have stumbled on to something far more sinister.

But the clock is ticking and time is running out for the next victim . . . END_OF_DOCUMENT_TOKEN_TO_BE_REPLACED

Synopsis: Lucy has a kind and adoring husband, a job she loves as a teacher, and a house on Mulberry Avenue with floaty curtains and the softest bed linen. After her troubled childhood, she knows life will never be perfect, but it’s pretty close.

She’s also got Amber, right next door. They never run out of things to talk about. Even if Amber’s life – with her high-profile job and handsome, wealthy boyfriend – is more glamorous than Lucy’s.

But then Amber starts to hint that her life isn’t all it seems, and when she comes to Lucy, terrified, saying that she’s getting threatening messages, Lucy promises to protect her. END_OF_DOCUMENT_TOKEN_TO_BE_REPLACED

Synopsis: Mark Abbott is dead. His sister refuses to believe it was suicide, but only Detective Sergeant Geraldine Steel will listen.

When other members of Mark’s family disappear, Geraldine’s suspicions are confirmed.

Taking a risk, Geraldine finds herself confronted by an adversary deadlier than any she has faced before… Her boss Ian is close, but will he arrive in time to save her, or is this the end for Geraldine Steel? 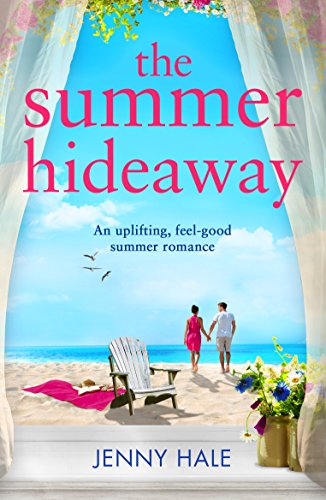 Synopsis: Alice Emerson and best friend Sasha Miller have made a pact. They’ve decided to swap city living for the beautiful white beaches of the Outer Banks and pour everything they have into launching an ice cream shop in the little house by the sea where Alice spent blissful childhood holidays with her grandfather. As Alice and Sasha add color to the walls of the beach house and tempt the locals with their delicious recipes, their fresh new life begins to take shape.
Swept away by her plans, love is the last thing on Alice’s mind. But she keeps running into mysterious doctor Jack Murphy, and finds herself falling for his golden charm and warm smile. As they laugh through sunshine-filled days and long romantic evenings, Alice tries hard not to think he could be the one for her – Jack is only here for the season, and Alice has had her fair share of heartbreak.Just when Alice’s summer couldn’t be more perfect, she discovers an old letter tucked away in the beach house. It contains a family secret that turns Alice’s world upside down and threatens the future of the ice cream shop. And then Jack reveals a secret of his own…Will Alice have her dreams shattered and her heart broken, or can she find true happiness this summer?
My Rating: 4/5

END_OF_DOCUMENT_TOKEN_TO_BE_REPLACED

How do you find the missing when there’s no trail to follow?

DC Lucy Clayburn is having a tough time of it. Not only is her estranged father one of the North West’s toughest gangsters, but she is in the midst of one of the biggest police operations of her life.

Members of the public have started to disappear, taken from the streets as they’re going about their every day lives. But no bodies are appearing – it’s almost as if the victims never existed.

Lucy must chase a trail of dead ends and false starts as the disappearances mount up. But when her father gets caught in the crossfire, the investigation suddenly becomes a whole lot more bloody…

She and Max are back together and she has a new and uncomplicated life sunning herself in Barbados. It’s what she’s always dreamed of.

Then she gets the news that her old friend Dolly Farrell is dead, and suddenly she finds herself back in London and hunting down a murderer with only one thing on her mind . . . revenge.

But the hunter can so quickly become the hunted, and Annie has been keeping too many secrets. She’s crossed and bettered a lot of people over the years, but this time the enemy is a lot closer to home and she may just have met her match . .

My Review: Mmmmm, I had kind of mixed feelings about this book but ultimately it was still a cracking read. It’s been (covers head in shame) 5 years (yes you read that correctly) since I last read a Jessie Keane and I was a little concerned at how relevant it would feel in my mind. However, that little worry was unfounded as the minute I started reading it all came rushing back. What I would say is that to really enjoy this book you are better reading the series in order to allow you a little bit more background knowledge.

We join Annie in Barbados where she feels like her life is finally returning to some normalcy. However she then receives a call that changes everything and her whole world looks like it’s about to end. Her long time friend Dolly has been found dead and it looks like murder. Annie jumps straight back on a plane to London with a view to finding who is responsible and making them pay. What Annie didn’t account for was her own people turning on her and she is surprised to find out that she isn’t sure why.

There were elements of this story that I loved but there were also elements that just didn’t sit right with me. Seeing how certain people treated Annie, it felt like a stretch but maybe that’s because I have had such a long gap between books. That aside, it was great to see some closure on one particular element of the story. The writing was excellent as it always is, but I think maybe now her other series is more in the front of my mind and maybe Annie Carter and Co could take a back seat for a while.

Synopsis: When his cousin stands accused of a terrible murder, Alex Cross returns to his North Carolina hometown for the first time in thirty years.

As he strives to prove his cousin’s innocence amid small-town corruption and prejudice, Cross unearths a family secret that makes him question everything he thought he knew.

Chasing the ghosts of the past, Cross is pulled into a case baffling local police: a grisly string of murders, all of socialites. Hot on the trail of a brutal killer as well as his own past, Cross knows the answers he finds might be fatal…

Synopsis: Izzy is a journalist who usually writes a technology column for a local newspaper. Her somewhat-intimidating boss William sets her the task of dating thirty-one men, via an internet dating site, all within a month, and writing about it for the paper.

Having an active, though fruitless, social life with her friend Donna, Izzy knows what she wants in a man, so creates a shopping list of dos and don’ts and starts ticking them off as she meets the men.

Follow the ups and downs of the dating process including Tim ‘the Weeble’, whose date leads Izzy to see banoffee pie in a whole new light, Lawrence the super-skinny social worker, Felix with his bizarre penchant for Persian Piranhas, and ‘the music maestro but don’t talk about dead pets’ Jake.

By the end of the month, will Izzy have met Mr Right?

My Review: Isabel our leading lady is a journalist who has been set a mission by her boss. 31 days in a month so she needs to have 31 dates via INternet Dating Sites all for her column! I think Izzy is somebody as a character I had to warm up to but once I did I found her quite funny. This was almost like reading snippets from hilarious stories either you have had or your friends have had in the past with all of her dates she goes on.

I did initially think this would be a little reminiscent of the film How To Lost A Guy in 10 Days, but it wasn’t however it does give you a real insight into the idea behind the theory. There were some moments in the story which had me laughing out loud and as time went on I felt Izzy’s pain of wanting the month to be over.

This is certainly a fun and light-hearted take on dating and was an enjoyable read. If you want something to make you giggle and something not too serious then this may well be the book for you.

Synopsis: Abby Miller thought she had the perfect family; a good looking, loving husband and a beautiful daughter. Her life was complete. The shock discovery that her husband, Jared, had been having an affair rocked her world. So when Jared suggested a short break to the Cannard Islands, to heal their fractured marriage, Abby agreed. An idyllic holiday turns into a nightmare when Abby sees something through the telephoto lens of her camera. Suddenly her life and the life of her daughter are in serious danger and no one seems able to help them.