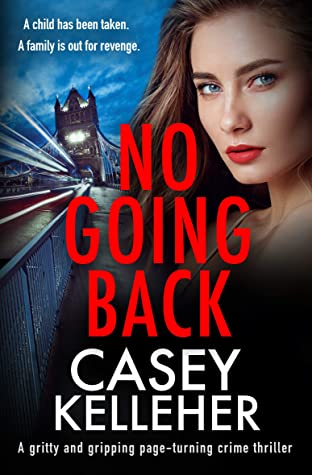 Synopsis: A child has been taken. A family is out for revenge.

Riley Cooke is just one day old when he is stolen from the hospital. His young mother, Shelby, is beside herself. DC Lucy Murphy and her team face a race against time to find the vulnerable baby and bring him home – before the child’s grandfather, fearsome gangster Pete Baker, takes matters into his own hands.

Pete is sure he knows who’s behind baby Riley’s abduction, and he thinks they ought to pray Lucy finds them before he does. Because someone is going to pay dearly for causing this much pain to his family.

They say never stand between a gangster and his target. But that’s exactly what Lucy must do – because if Pete is wrong, innocent blood could flow.

My Review: Casey Kelleher NEVER fails to impress me with her books and this one is no different. I have really taken to Lucy Murphy as a lead character and her backstory is so interesting and makes reading about her that little bit more intriguing. This time around Lucy and the team have to deal with a missing child. However, it’s not quite that simple as there has been a recent case involving the murder of a pregnant woman nearby. Ashley Cooke and his girlfriend Shelby are the people on the harrowing end of their child being taken. What doesn’t help matters is that Shelby’s father Pete is a known gangster and Ashley has also got himself into hot water in other ways, so are either of those factors cause for somebody to steal their baby?

This storyline had me gripped from the beginning to the end and although I did finally work out the kidnapper it was pretty late in the game! You could probably read this as a standalone but reading the first two books first of all are brilliant and are worth reading, but they also give you some real background on Lucy and the other supporting characters. I thoroughly enjoyed this book and CK remains one of my favourite authors!