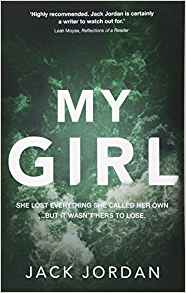 Synopsis: Paige Dawson: the mother of a murdered child and wife to a dead man. She has nothing left to live for… until she finds her husband’s handgun hidden in their house. Why did Ryan need a gun? What did he know about their daughter’s death? Desperate for the truth, Paige begins to unearth her husband’s secrets. But she has no idea who she is up against, or that her life isn’t hers to gamble – she belongs to me. From the bestselling author of Anything for Her, Jack Jordan’s My Girl is the new chilling thriller that you won’t want to miss.

My Review: This is my first book by Jack Jordan and I was pleasantly surprised. Paige Dawson is our lead character and in short she is a mess. She is a functioning alcoholic who pops pills to make her life seem a little easier. Since her daughters death 10 years previously as well as her husbands more recent suicide she is sliding down a slippery and very destructive route. At first she is written off as somebody who is seeing things when she convinces herself she didn’t leave the TV on, or the recorder playing. Of course everybody else assumes its Paige in her own world. Pretty soon Paige knows that something is amiss especially when she discovers that her husband was hiding a gun in their house.

The writing was good and the pace was certainly set early on in the book. However, there were a couple of things that I think could have been left out (such as the issue with her Doctor, that made me super uncomfortable) and at parts the story felt padded when it didn’t need to be. Those small niggles aside I think this was an interesting read which certainly kept my attention. I will definitely be reading other books of his I have waiting on my ever growing to be read list

One thought on “My Girl by Jack Jordan”