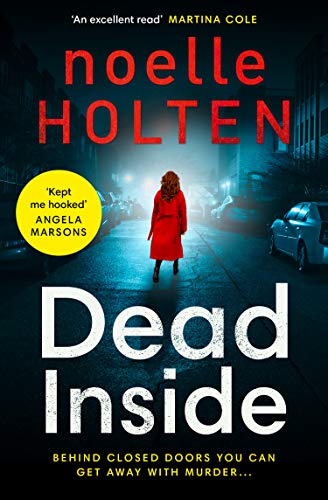 Synopsis: When three domestic abuse offenders are found beaten to death, DC Maggie Jamieson knows she is facing her toughest case yet.

The police suspect that Probation Officer Lucy Sherwood – who is connected to all three victims – is hiding a dark secret. Then a fourth domestic abuser is brutally murdered. And he is Lucy’s husband.

Now the finger of suspicion points at Lucy and the police are running out of time. Can Maggie and her team solve the murders before another person dies? And is Lucy really a cold-blooded killer?

My Review: Okay so I have to be completely honest here and say that I know Noelle as she first became a reviewer on my Blog, and not long after that we became firm friends. When she mentioned she would like to write a book, little did I realise that here I would be years later reading her debut novel. I also have to confess I was nervous going in, because all my friends, and some followers as well as authors know I am always honest about books. I mean what if I didn’t like it and had to say as much in the review? Well I was so busy worrying about all that I didn’t consider how I would feel if I started reading, and then realised that I hadn’t put the book down because it was so good? Thankfully, it seems the Universe has aligned Noelle with the job she was meant to do as her debut novel was written like she was a seasoned pro.

Lucy Sherwood is our main character and what a character she is. Instantly you are  drawn into the story as it becomes very apparent that Lucy has two very separate lives. Her work life as a Probation Officer was genuinely authentic (and Noelle’s previous career knowledge shone through there) and she was a likeable character. However, then there is the issue of her home life which is nothing short of harrowing.

On the other side of the fence is DC Maggie Jamieson who is investigating the murders of 3 men with a history of violence and domestic abuse. Sadly for Lucy all three men had her as their Probation officer. When Lucy’s husband becomes the fourth victim all eyes turn to Lucy!

I really thought I would be able to pull some criticisms from this but I truly couldn’t. It kept me gripped from start to finish and fits the bill perfectly for what a true psychological thriller should be. I would absolutely recommend this to people, the only thing I would say is that it obviously does touch on domestic abuse and some of it is not easy to read. I would suggest if the subject matter is something you are sensitive to then this may not be to your taste, but I felt it was dealt with extremely well. I am thrilled that Noelle is finally writing as it’s pretty clear that this is what she should have been doing for a career! An amazing debut novel!

2 thoughts on “BLOG TOUR: Dead Inside by Noelle Holten”