Synopsis: Only the lawless will survive . . .

It is 1975 and Ruby Darke is struggling to deal with the brutal murder of her lover, Michael Ward.

As her children, Daisy and Kit, battle their own demons, her retail empire starts to crumble.

Meanwhile, after the revenge killing of Tito Danieri, Kit is the lowest he’s ever been. But soon doubt is thrown over whether Kit killed the right person, and now the Danieris are out for his blood and the blood of the entire Darke family.

As the bodies pile up, the chase is on – can the Darkes resolve their own family conflicts and find Michael Ward’s true killer before the vengeful Danieris kill them? Or will they take the law into their own hands . . .

My Review: Jessie Keane has created a cracking new family of characters in the Darke Family. Ruby Darke is the mother of twins Kit and Daisy. What I will say is to gain any sort of traction with this book is that you need to read the first one. There is no doubt you can pick up the thread but it’s far more enjoyable having the back story. Kit is still trying to find out who was responsible for the death of Michael Ward, Ruby’s lover and his father figure. His twin sister Daisy is also battling with finding her place within the Darke Family.

The additional characters that make an appearance all have their rightful place and I am a particular fan of Rob, Kit’s right hand man. On the opposing side the feared Italian family the Danieri’s are on the scene and there is troubled waters between the two families. The story, characters and pace were absolutely spot on and I found that I raced through this book in a day and half.

If you are a fan of Kimberley Chambers, Martina Cole  and the like then Jessie Keane is certainly an author you will love. She is certainly one of my favourites, I’m just sad that I am fast running out of books of hers to read. I would highly recommend this book, but do yourself a favour and start with book one Nameless. Another cracking installment, I am just grateful that book 3 named The Edge is ready to go on my Kindle! 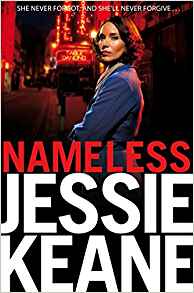 One thought on “Lawless by Jessie Keane (Ruby Darke #2)”