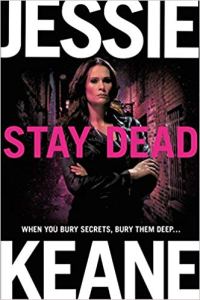 She and Max are back together and she has a new and uncomplicated life sunning herself in Barbados. It’s what she’s always dreamed of.

Then she gets the news that her old friend Dolly Farrell is dead, and suddenly she finds herself back in London and hunting down a murderer with only one thing on her mind . . . revenge.

But the hunter can so quickly become the hunted, and Annie has been keeping too many secrets. She’s crossed and bettered a lot of people over the years, but this time the enemy is a lot closer to home and she may just have met her match . .

My Review: Mmmmm, I had kind of mixed feelings about this book but ultimately it was still a cracking read. It’s been (covers head in shame) 5 years (yes you read that correctly) since I last read a Jessie Keane and I was a little concerned at how relevant it would feel in my mind. However, that little worry was unfounded as the minute I started reading it all came rushing back. What I would say is that to really enjoy this book you are better reading the series in order to allow you a little bit more background knowledge.

We join Annie in Barbados where she feels like her life is finally returning to some normalcy. However she then receives a call that changes everything and her whole world looks like it’s about to end. Her long time friend Dolly has been found dead and it looks like murder. Annie jumps straight back on a plane to London with a view to finding who is responsible and making them pay. What Annie didn’t account for was her own people turning on her and she is surprised to find out that she isn’t sure why.

There were elements of this story that I loved but there were also elements that just didn’t sit right with me. Seeing how certain people treated Annie, it felt like a stretch but maybe that’s because I have had such a long gap between books. That aside, it was great to see some closure on one particular element of the story. The writing was excellent as it always is, but I think maybe now her other series is more in the front of my mind and maybe Annie Carter and Co could take a back seat for a while.

One thought on “Stay Dead by Jessie Keane (Annie Carter #6)”