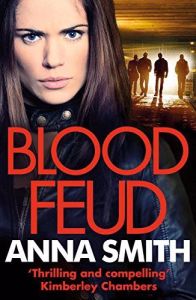 Synopsis: They came for her family. Now she’s coming for them. This nail-biting thriller introduces Glasgow’s newest gangland mistress, Kerry Casey – a gripping read perfect for fans of Martina Cole and Kimberley Chambers.

Kerry Casey thought she’d made a life away from the dirty dealings of her gangster family. Her father wanted to make them legit – her brother Mickey had other ideas, and now it’s got him killed. When Mickey’s funeral turns into a bloodbath at the hands of a group of anonymous shooters and Kerry’s mother is killed in the crossfire, Kerry finds herself at the head of the Casey family, and desperate for revenge.

Running a crime empire is not a job she ever asked for, and not one she wants, but Kerry is determined to fulfil her father’s wishes and make the Caseys go straight. First, though, she will find the men who murdered her mother, and she will take them down, no matter what it takes.

Kat’s Review: I admit when I realised that Anna Smith had let go of Rosie Gilmour I was devastated. I knew that a new book was looming but who on earth would match up to Rosie Gilmour? Well I can assure you that the Kerry Casey certainly matches up and add to that the fact that the author has just created an absolutely outstanding book and I think we may well have a contender for the book of the year so far! Kerry Casey seems to be the start of a new series and what a hell of a book to start it off with.

Kerry Casey is nothing like her Gangster family, she is a hot shot lawyer who has spent many years living in Spain. However when her brother Mickey is taken out as Kerry attends the funeral she has no idea she is in the middle of what he left behind. When her mother gets killed in the crossfire, Kerry has no choice but to take the reigns for the business. What she didn’t realise is just how good at it she would be.

The other character I loved in this book was Sharon and it made a real change for the women to be the head honchos and to see them building an empire. The additional characters we see are all part of this amazing book and they all made a lasting impression on me. I got a real feel for this extended family and literally am chomping at the bit wondering how long until the next book. I have always been a huge fan of Anna Smith especially her last series, but I have a sneaking suspicion that this series may well be even better!

I read this in two sittings in just a day and a half and cannot WAIT to see the next book in the series. For those juts as impatient as me I would guess sometime early in 2019 but we can always hope for something sooner. Thanks for an absolute cracker of a read Anna, a truly wonderful book and for me the best this year so far!