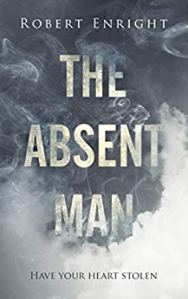 Synopsis: BERMUDA JONES AND ARGYLE ARE BACK IN THE THRILLING SEQUEL TO DOORWAYS

A woman is found dead in her flat on a freezing night in Glasgow, her heart ripped from her chest. With no signs of a weapon or forced entry. Hours later, her heart is delivered to the Necropolis on the outskirts of town.

Six months after stopping the terrifying Barnaby atop Big Ben, Bermuda finds himself on the hunt for a killer in a city he doesn’t know with a police force that doesn’t want him. With no links between the victims and the death toll rising, Bermuda has to face a sceptical detective, a seemingly distracted Argyle and an unknown horror that stalks from the shadows.

All in the name of answering one question…

Who is The Absent Man?

Kat’s Review: I was asked by Rob Enright to review his first book named Doorways back at the end of 2016.When I realised the book was sci-fi/fantasy etc I was literally furious. It was a genre I didn’t have any interest in and have never read. However, Mr Enright not only proved that I was wrong, but proved he had the ability to create an absolute corker of a book with characters I fell in love with. Bermuda Jones is an ordinary bloke…sort of. It’s current day and London and the UK is as we all know it, however there is another world which inhabits the other type of species that constantly threaten humans. They are knows as ‘Others’. Bermuda is one of the few people who has walked both worlds and lived to tell the tale. He has the ‘knack’ of being able to see the ‘Others’ stalking the humans and the danger they could potentially be in. He works for an Organisation which is highly secretive.

Now, for those that don’t read the genre, they have probably already dismissed this book. Let me ask that you don’t do that because you may be missing out on an amazing read. Thankfully Rob Enright’s second book was absolutely spot on and was just as enjoyable, if not more, than the first one. This latest book starts with the murder of a young woman in Glasgow, and she is found with her heart literally ripped from her chest. Although a team in Glasgow including Detective Samantha McAllistair are investigating Bermuda is called in to assist. That first case is just the beginning and once again Bermuda along with his trust friend Argyle are there every step of the way. As more women are found the reasons behind it start to become clear, and there is nothing that anyone on the human side of the world will understand.

I literally devoured this book in just over a day and can honestly say it’s an amazing read. I am absolutely gutted I finished it so quickly and cannot believe that Rob Enright has not yet been nabbed by a publisher. Bermuda is a character that is absolutely perfect and although he has many traits that are typical for a lead in a book, he is so very different due to his unusual situation. His strange but endearing friendship with Argyle as well as the introduction of Detective McAllistair were both absolutely a must for this book. However, I felt SO sad by the ending, although I am hoping that maybe (fingers crossed) there may be a sliver of hope for another book featuring all my favourites (I can dream). An absolutely outstanding book which I thoroughly loved and would hugely recommend!