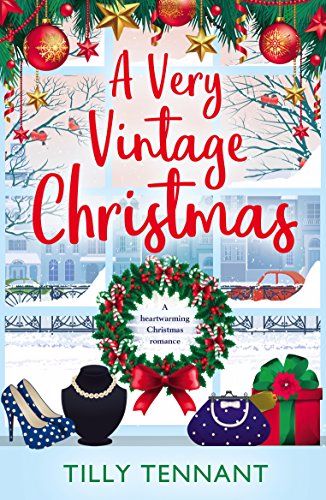 Synopsis: The fairy lights are up and shoppers are flooding the snowy seaside promenade. It’s going to be a busy month at Forget-Me-Not Vintage, a magical shop with a warm heart where every item has a story to be told.

With bright red hair and an infectious smile, Dodie is a hopeless romantic and absolutely one of a kind, just like the pieces in her shop.

When Dodie finds a love letter in the pocket of an old woollen coat, she makes it her mission to deliver it to its rightful owner. Following the address, she manages to persuade the handsome but reluctant new tenant, Edward, to help her with her search.

As the story of the letter unfolds, Dodie is there, as always, to pick up the pieces and make things right. But who will be there for her when her own love story needs a helping hand?

Is it too much to dream of a happy ending like the ones in the black and white movies she adores?

Kat’s Review: I have loved Tilly’s books that I have read in the past and was looking forward to indulging in the one of the many Christmas Themed books I have at the moment (it’s never too early right?). The cover is to die for and gives it that Christmassy feel however although the book is centered around Christmas time it’s not too much overkill which I liked. Dodie is a little quirky, she dyes her hair all sorts of colours and owns and runs a Vintage clothing store in town. She finds a letter in among some bits she has brought but all she has is the name of the people who wrote and received the letter and an address. Considering it was in 1944 she has her work cut out but wants to know more about the people involved.

On her quest to find out more she meets Ed who somehow gets involved in her search. Other notable characters were Dodie’s friend Isla, her slightly kooky Gran and even Nick, the homeless guy who Dodie talks to. Dodie’s Gran definitely stole the limelight for me and it was hillarious listening to her regular updates on what ‘classes’ she was attending! It took me a few chapters to get into the story but once there I was completely enthralled.The story of the Wartime romance adds another level to this book and for me made it so much more interesting as it intertwines with Dodie’s life. Overall this is another great book by Tilly and what makes it even better is knowing there is another installment soon! A Cosy Candlelit Christmas is being released in October 2017 and features Isla who is seen in this story. I can’t wait to get started on it!

One thought on “Blog Tour: A Very Vintage Christmas by Tilly Tennant”