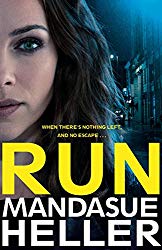 Synopsis: After being cheated on by her ex, Leanne Riley is trying her hardest to get her life back on track, which isn’t easy without a job and living in a bedsit surrounded by a junkie and a mad woman.

On a night out with her best friend she meets Jake, a face from her past who has changed beyond all recognition. Jake is charming, handsome and loaded, a far cry from the gawky teenager he used to be. Weary of men, Leanne isn’t easy to please, but Jake tries his best to break through the wall she’s built around herself.

But good looks and money can hide a multitude of sins. Is that good-looking face just a mask? And what’s more, what will it take to make it slip, and who will die in the process . . . ?

Kat’s Review: It’s been a while since I have read a Mandasue book and I was looking forward to her latest release. I must confess having finished it I was a little surprised at the change in pace almost, it seemed to me that there was certainly a slightly different theme to her writing compared to other books she has released. That said, this was still a great read and I was certainly engrossed, although admittedly a little surprised.

Leanne Riley lives in a grotty bedsit, has little money, no job, and little prospects. Her life seemed to have taken a downhill turn after catching her bloke cheating on her and losing her job. Her friend Chrissie seems to be the only good and consistent thing in her life. When she goes on a rare night out she bumps into the very handsome Jake who it turns out she knew back at school. Her life suddenly looks a whole lot more interesting with a new man on the scene who is showing interest. Although she is wary of men Jake is literally a Prince Charming and it seems Leanne’s luck has finally changed.

Leanne and Chrissie were great characters and very easy to read, I especially liked their obviously close friendship. Ben and Jake’s friendship seemed a little one sided but I loved Ben and thought he was a real gem of a character. By the halfway mark I could have been mistaking this sort of book for one that fall sin the Romantic Suspense genre, however once past that point it all seems to change…and very quickly.

I won’t say any more as it will inevitably spoil some great threads in the story line, suffice to say I was hooked with the plot and thoroughly enjoyed this latest release. I finished the book in a little over one and a half sittings and realised that although this was a slight departure from her usual style of writing, I really liked it. It almost keeps the work ‘fresh’ and instead of getting a dose of the ‘usual’, you get a variation of the usual which makes for a very refreshing change. Another great read with this new release and one that will no doubt tick the boxes for all her fans.