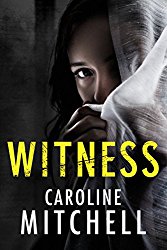 Synopsis: To Rebecca it was a brave decision that led to her freedom from domestic abuse. To Solomon it was the ultimate betrayal.

It’s been ten years since Rebecca’s testimony saw Solomon locked away. Enough time for the nightmares to recede, the nerves to relax; enough time to rebuild her life and put the past behind her.

Then one day a phone rings in her bedroom—but it’s not her phone. Solomon has been in her home, and has a very simple message for her: for each of the ten years he has spent in jail, Rebecca must witness a crime. And, to make matters worse, she has to choose the victims.

Fail to respond and you get hurt. Talk to police and you die. Ready to play? You have sixty seconds to decide… As the crimes grow more severe, the victims closer to home, Rebecca is forced to confront a past she had hoped was gone forever.

Kat’s Review: Rebecca has taken a brave decision and testified against her husband Solomon. With him safely tucked behind bars, she moves on with her life until ten years later when a phone rings in her bedroom. That phone call changes everything and her life and sanity are pushed to the edge. This is a departure for Caroline Mitchell as she normally writes paranormal thrillers so it was nice to see a slight change. The stand out thing for me was the gritty realism in terms of how you felt for the character Rebecca.

Domestic violence is not a nice thing and to manage to convey that all encompassing fear is no easy feat, however this author has done it with ease.

Rebecca finds herself in the middle of a sick and twisted game where she has to decided who the victim is of a chosen crime, and the worst part is that she has less than a minute to decide. As each threat is given you can almost feel the spiral for Rebecca as she battles to maintain her normal composure. It rapidly descends into a situation where even as a reader you are questioning her sanity. It’s extremely;y dark but exceptionally written in a way that draws you in and leaves you feeling anxious and bewildered. Maybe not the easiest reading subject but done in a way where the hackles on the back of your neck rise and you almost feel the tension, which  for me is an awesome experience as a reader.

The story is very fast paced but dark, terrifying and in short is the perfect psychological thriller. Mind games galore and a superbly written dialogue creates a need to turn pages faster than is possible. Although I absolutely love the other series Caroline Mitchell writes, for me this is her genre. She has created a genius book that had all the perfect ingredients and I sincerely hope we see more where this came from. Highly recommended by me!

One thought on “Witness by Caroline Mitchell”