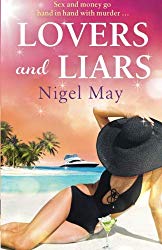 Synopsis: When Millionaire playboy Sheridan Rivers is found dead at his luxurious hotel on the paradise island of Barbados, there are several suspects in the frame…

Sutton: Sheridan’s long-suffering wife was permanently pushed aside for his younger lovers. Was it time for her to make a stand?

Kassidy: Sheridan’s assistant longs to be wealthy in her own right. Employed for her sexual and organisational skills, could she have had her eyes on a bigger prize?

Nikki: Sheridan’s oldest daughter has done something really bad that her dad has discovered. What price will she pay to keep his silence?

Heather: The apple of her father, Sheridan’s eye. But she’s recently been widowed due to a terrible accident Sheridan was responsible for. Is the time ripe for revenge?

Four women, each with a cross to bear – all waiting for the perfect moment to exact their revenge .

Kat’s Review: Well another Nigel May book an another corker of a read. It’s packed to the rafters with Glamour, murder, sex, more sec, infidelity, skulduggery…the list goes on! When I started to read this book I was a bit worried as there seemed to be so MANY characters. Actually by chapter 3 all the mundane duties such as housework, dinner and a bath had gone out the window. What at first seemed like a character overload ended up being just perfect. Sheridan Rivers is smack bang in the middle of every thread in this story. As the owner and Millionaire of the luxurious Hotels named Velvet he is every bit the arrogant idiot I expected him to be (and some). His long suffering wife Sutton is one of the ladies that has suffered as a result of this despicable man, however has the joy of having two wonderful daughters Nikki and Heather, The two girls couldn’t be more different as characters but equally as readable. Nikki is the party girl where a silly mistake gets her into an impossible situation. Heather on the other hand is a kind and gentle soul who is married to an amazing guy who is her world. Then on the other end of the spectrum you have Kassidy, Sheridan’s assistant who is not only hired for her skills but for her antics in the bedroom.

Phew…already I feel overloaded and I have already read this book! However the reality of reading this couldn’t be further from the truth. As each woman takes a thread to the story it gets more and more involved, dangerous and seems that nobody has any idea just how much double crossing is going on. At the halfway point I was completely and utterly enthralled, addicted and absolutely convinced that no amount of cajoling from my husband would move me from my sofa, book in hand.

A lot of the story features the women, however the main event that this story centres around is a major boxing match that will be set in the Barbados hotel featuring Hatton Eden. Hatton and his manager and trainer Fidge were excellent and added another layer of spice to the story. The settings for this sun drenched romp could’t be any better and it made me long for a sandy beach. It’s a saucy read (it seems Nigel is getting saucier with each book he writes and I LOVE it), so make sure you don’t have any nosey neighbours reading over your shoulder. Although in real life I did have to put the book down (sadly I HAD to eat) I read it in as near to one sitting as is humanly possible. If you are slightly prudish, then maybe not the book for you. For me this has everything PLUS MORE and I think this is my favourite of his books to date. Whoever said men couldn’t write romp clearly hasn’t had the pleasure of reading Mr May! Roll on the next book!