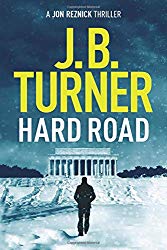 Synopsis: Jon Reznick is a “ghost”: a black-ops specialist who takes his orders from shadowy handlers, and his salary from the US government. Still mourning the loss of his beloved wife on 9/11, he’s dispatched to carry out a high-level hit. Reznick knows only that it must look like suicide. It’s textbook.

But the target is not the man Reznick expected. The whole setup is wrong. In an instant the operation is compromised, and Reznick is on the run with the man he was sent to kill. A man wanted by the FBI, and by a mysterious terrorist organization hell-bent on bringing the United States to its knees. FBI Assistant Director Martha Meyerstein is determined to track him down, and to intercept whatever it is Reznick was sent to do.

When Reznick’s young daughter becomes a pawn in the game, he has to use more than his military training to stay one step ahead of those responsible. Meanwhile, he is the only person who knows the true extent of the threat to national security—and has the stealth and determination to stop it.

Kat’s Review: Mmmm, I have to say when I read the reviews previous to reading the book I was a little unsure. I don’t normally read the reviews but for some reason n this case I did and the feeling seems very mixed. I decided to get on with it and found myself straight in from chapter one, swept away with the characters and story line. Jon Reznick is not a good guy, nor is he a bad guy! He’s ex Delta Forces and has been given a job by his handler. When Reznick turns up to carry out the high level hit, something is off. The target isn’t the man he was expecting and that starts a chain of events that ends up tuning into something a whole lot worse.

On the other side of the fence sits FBI Assistant Director Martha Meyerstein. Martha is very likeable and I thought believable. She is tough but has morals and although she may bend rules she categorically won’t break them. This makes a refreshing change as may female leads are just renegades. When Meyerstein realises Resnick is involved they go all out to catch him. It seems  Resnick hasn’t only managed to not complete his mission, but has unknowingly become part of a bigger plan that involves a terrorist organisation.

The pace is pretty break neck from the start and rarely loses pace. At times Resnicks need to be awake and on the move and that made me feel tired for him but ultimately got across that urgent feel when reading a book like this. There are plenty of plot twists and an awful lot of threads to follow which keeps the tempo. There were moments when it had a real ’24/Homeland’ kind of feel and I wouldn’t be entirely surprised if this was used as the basis for a show. Ultimately it made me want to carry on and read book 2 so a definite thumbs up from me,