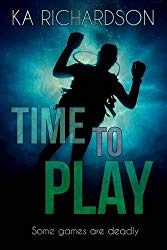 Synopsis: DI Alistair McKay is still reeling from the ‘one that got away’ but when he is called to deal with a potential murder at the water side, he must put his personal worries aside.

As police diver, Marlo Buchanan, starts pulling bodies out of the water, it becomes clear that something isn’t right. Someone is torturing young girls and dumping them in the local reservoir.

Then the body of a man is discovered and Mackay and Buchanan are pulled into the seedy underworld of human trafficking. As the team race against the clock tensions start to run high. Can they overcome their personal demons to work together? And will they find the killer before he strikes again?

Kat’s Review: I haven’t read the other 2 books in the North East Police series but that made no difference to this book. However, having completed this book it’s just made me disappointed that I didn’t read them as this one was a great read. Marlo Buchanan is a Police diver and to be honest this career path is one I haven’t seen in a fiction book I’ve read so it made a refreshing change. Her and the team are called out regularly and at first there seems to be no link to the other part of the story.

Elvie is another main character we get to know as we witness human trafficking first hand as the young fifteen year old is brought to England to await her fate. The opening chapters are certainly an eye opener and I feel like there are no holds barred in the descriptive horror that awaits these girls. In addition to Elvie, we meet Marlo’s colleague Connor who is struggling not only with his own secrets, but the fact that his Mum is suffering with Alzheimer’s. I did love the character of Marlo and her colleagues and other team members that form part of the RIB, also subsequently form part of the ongoing story lines which start to thread together as the book progresses.We meet Ali who is another copper whose path ends up crossing that of the Dive Team and Marlo as he investigates his own cases. I liked the back story with Ali and he is an extremely likeable guy.

Due to the fact there are multiple threads going on, at first it seems there is too much much in all honesty it was done exceptionally well and each element to the story piqued my interest. As time progresses it becomes clear that there is a lot more linking all the characters than it appeared at first. The writing was easy to get into BUT I did have one major gripe. I understand that sometimes the use of accents means the author changes wording so it seems more realistic such as using slang etc. But in this book the word ‘gunna’ instead of going to appeared more times than it seemed I’ve had hot dinners. I know that seems like I am being super picky but it grated on me as I didn’t think it fitted with the characters. Also both Marlo and Ali towards the last quarter of the book start calling everybody ‘love’? It came from nowhere and again just wasn’t in keeping with the characters. This was the main reason for me not giving it 5 stars, otherwise it was a cracking read.

I shall certainly be reading her future work as the book was fantastic, I will just cross my fingers in the hope she is ‘gunna’ change the characters wording in future to slightly fit their mould more.