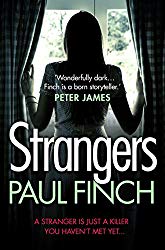 Synopsis: Unknown, alone, and fearing for your life.

As PC Lucy Clayburn is about to find out, going undercover is the most dangerous work there is.

But, on the trail of a prolific female serial killer, there’s no other option – and these murders are as brutal as they come.

Lucy must step into the line of fire – a stranger in a criminal underworld that butchers anyone who crosses the line.

And, unknown to Lucy, she’s already treading it…

Kat’s Review: My name is Kat and I am a ‘Heck’ a-Holic’…with that in mind I was a little anxious starting a book by Paul Finch which didn’t feature my beloved Mark Heckenburg. However, I am now ‘fan girling’ over a new character so I can rejoice that I can stave off my Heck fix for a while with the new girl of the hour PC Lucy Clayburn.

PC Lucy Clayburn is introduced to us in a somewhat disastrous view of an assignment, and following on from that I wondered what on earth she would be doing. Well, it turns out that being a PC and making some hard earned collars on the streets meant she was a waling candidate for a new task force put together to catch what seemed to be a prolific female serial killer.

That in itself is quite an unusual scenario, as is the state of the bodies by the time this maniac woman has finished with them.

Enter Detective Superintendent Priya Newal who wants Lucy on the team. Priya makes for another strong lead female character and I like the fact that she is a firm but fair influence over Lucy. With Priya’s backing Lucy forms part of the team and goes undercover. Because of her previous assignment it seems she is even more determined to make an impression which means ultimately putting herself in danger.

From start to finish the book packs a punch, filled to the brim with dangerous individuals, strong lead and secondary characters and a pacy and thrilling story line. You can’t really ask for too much more can you? Paul Finch seems to have quite the knack of creating lead characters that stay with the reader. I know that Heck is my favourite as the series is a few books in and although Lucy is in second place, if he continues to write like this…who knows! I was so thrilled to have read and loved this book as much as I did, and I can certainly recommend it to people. All I need to do now is cross my fingers and hope I don’t have too long a wait to see Lucy again.