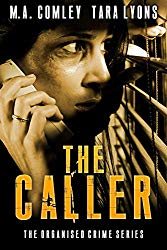 Synopsis: The first gripping book in The Organised Crime Team series by NY Times bestselling author of the Justice series, M A Comley and co-author Tara Lyons, author of In The Shadows.

When The Caller rings… what would you do?

The Organised Crime Team is a newly-formed unit with one of the toughest tasks in London. Led by DI Angie North, their first investigation is a cold case that has foxed several officers in the Met for months.After Angie holds a TV appeal regarding the case, a number of similar aggressive attacks are brought to her attention. The team call on their contacts on the street for help. Their interest is sparked when several local names surface.

To bring the criminals to justice a member of the Organised Crime Team is asked to risk their life in a dangerous covert operation.

Kat’s Review: Okay so I have read books by both Tara Lyons and Mel Comley and was looking forward to seeing what they produced as a team. The Organised Crime Team (OCT) is run by a really likeable character DI Angie North, her team are pretty likeable too. They are tasked with findng the people responsible for a cold case of robberies and attacks. We get a glimpse of the people behind it from early on in the book and I actually liked this element as there was something of a cat and mouse play going on between them and the OCT.

The pace is okay although in all honesty not the fastest pace but certainly enough to keep me hooked on reading it. What I really like in this book is the fact that as a reader you feel like you are really getting to know the team. Each member is explained and it gives you a fantastic base for the follow on books.The storyline makes it clear that the basis for these robberies is a very simple thing, which in real life wouldn’t be that difficult to imagine (scary). As the book continues Angie and the team have to find enough evidence to nail the people responsible but that means putting a member of the team deep in the heart of it all and potentially at great risk.

There were certain things in the book I felt were too easy for the team and I though weren’t plausible enough (hence the drop from a 4 star read). That said, the characters were really likeable and the writing flowed well and was so easy to become immersed in.Overall I think this a brilliant base to a series, and I could see myself quickly becoming attached to the characters and wanting to see where it goes