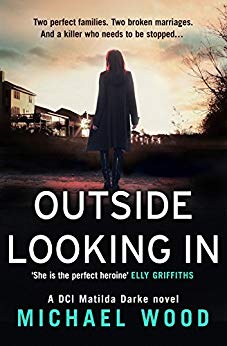 When elderly George Rainsford goes to investigate a suspicious noise one night, the last thing he expects to find is a bloodbath. A man has been killed and a woman brutally beaten, left for dead.

The victims are Lois Craven and Kevin Hardaker – both married, but not to each other. Their spouses swear they knew nothing of the affair and, besides, they both have alibis for the attack. With nothing else to link the victims, the investigation hits a dead end.

The pressure is on for investigating officer, DCI Matilda Darke: there’s a violent killer on the loose, and it looks like her team members are the new targets. With no leads and no suspects, it’s going to take all Matilda’s wits to catch him, before he strikes again.

Kat’s Review: I read the first in this series in February of this year so Matilda was very fresh in my mind. I was looking forward to reading the next instalment and seeing how things have gone for Matilda. Matilda is an extremely likeable character and one that I really enjoyed reading about in book 1. In book 2 she seems to have started to get herself together, however the reader has no time to dwell on that as you are thrown straight in with a gruesome murder scene. An elderly neighbour finds a horrific scene with one man dead and a woman brutally beaten and on deaths door. DCI Matilda Darke and her team are on hand to take the investigation to try and catch the killer.

The two victims Lois Craven and Kevin Hardaker are both married and this opens up the door to numerous suspects and as the story unfolds more characters emerge as potential suspects. On the side of Matilda, we are reminded about her history and can see she is still struggling to come to terms with the loss of her husband a year previously. We see her personal battles both emotionally and professionally and I really felt that we are seeing more of the real her. This is always key to a series and I think Michael Wood has really stepped up to the plate and shown people how it should be done.

The book itself has multiple layers and threads which kept me compellingly reading late into the night. Doubled up with recurring characters such as Matilda’s colleagues DC Rory Fleming and DS Sian Mills and Darke herself you have the perfectly balanced book. The story is well paced and the chapters nice and short to keep the story moving. Just when I thought I had it all figured out, oh no…Mr Wood decides to mix things up again, even going as far as throwing extras into the Epilogue. All I can say is that it was a fantastic way to catch the reader right at the end and leaving them wanting more. I am massively impressed with this author and really do recommend him. Another brilliant book and I am so looking forward to the next one.