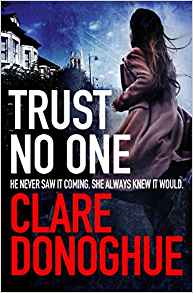 Synopsis: A marriage is what you make it, isn’t it? It’s what you put into it. It’s not just about love, it’s about understanding another person’s point of view. Sometimes there are things you find out about yourself and each other which means the marriage has to end. Sad, particularly when kids are involved – but all pretty normal.

Normal that is, until there’s a murder.

DS Jane Bennett and DI Mike Lockyer are called in to investigate one of the South London murder squad’s most difficult and distressing cases yet – where family and friends come under scrutiny in the hardest of circumstances.

KAT’S REVIEW: Okay, so this series is relatively new and I felt like book one got off to a shaky start. Book 2 was a definite improvement and this latest release is another good read. It seems like the author is still finding her feet with the characters and I think this series will improve with each book that is written.  Mike Lockyer seems to be well on his way to being ‘back to normal’ following books 1 and 2. Jane on the other hand is in for a whole host of upsets especially involving her personal life.

On a work front, the death of Richard Taylor at first seems like death by natural causes; however it soon becomes clear that this isn’t the case. After the initial outcome of foul play the investigation makes a slow but steady start and we are introduced to all aspects of Richard Taylor’s life. The plot was a bit of a slow starter, but it seemed as the story progressed there were more suspects than it first appeared. Mike has been newly promoted to Senior Investigating Officer so both he and Jane are involved in the case.

Jane’s personal life then seemingly takes hit after hit, which in one respect I enjoyed. You certainly feel like you are getting to know the characters and their weaknesses and other elements to their personal life. Jane was again the stand out character for me, however the story works with both Mike and Jane involved and the loss of one may make for a weaker book.

Overall this was certainly an enjoyable book and the pace and plot kept me interested right until the end. I liked the fact I only guessed the culprit towards the very end and the story involving this murder was played out in stages. I am hoping that with each book the pace picks up as readers get to know the characters more and more. There is certainly a lot of ‘wiggle room’ for expanding storylines involving both Jane and Mike. This is definitely a series I will be keeping up with.