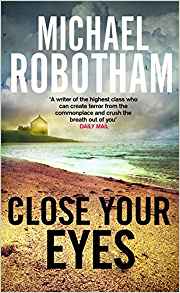 Synopsis: I close my eyes and feel my heart begin racing

They’re going to find me

A mother and her teenage daughter are found murdered in a remote farmhouse, one defiled by multiple stab wounds and the other left lying like Sleeping Beauty waiting for her Prince. Reluctantly, clinical psychologist Joe O’Loughlin is drawn into the investigation when a former student, calling himself ‘the Mindhunter’, jeopardises the police inquiry by leaking details to the media and stirring up public anger.

With no shortage of suspects and tempers beginning to fray, Joe discover links between these murders and a series of brutal attacks where his victims have been choked unconscious and had the letter ‘A’ carved into their foreheads.

As the case becomes ever more complex, nothing is quite what it seems and soon Joe’s fate, and that of those closest to him, become intertwined with a merciless, unpredictable killer . . .

Kat’s Review: I am becoming quite the ‘Robotham’ fan I must say. The last book I read of his was also my first (Life and Death) but I loved it so much I really wanted to make a start on this one. Close Your Eyes was released earlier this year and the synopsis sounded great. What I didn’t realise was that I was hitting a series of books featuring Joe O’Loughlin at this release which was number 8. Thankfully, you can get away with reading this as a standalone, but I was devastated to realise I had missed the previous 7.

Joe is a Clinical Psychologist, who suffers from Parkinsons. He is reluctantly brought into a police investigation because of a former student of his, that is intent on using Joe’s name to get him involved with the latest case.  We also meet his ex-wife Julianne and children Charlie and Emma. What seems like a straightforward double murder, throws up more suspects than you could imagine and that adds to the general intrigue of the story.

The other element of the story I liked was his old friend, ex-policeman, Vincent. Both of them are re-working the case and there are multiple threads that are picked up and then worked on even more as the suspect list grows, as does the reasoning behind them. The murder victims Elizabeth and Harper Crowe open up a literal can of worms as their lives are broken down to enable Joe to get to the bottom of who would want them both dead.

This book was a real ‘whodunnit’ and had the added element of a cracking lead character and absolutely brilliant additional characters. Although I haven’t read the rest in the series, this made me want to immediately catch up with the back catalogue. The ending was also a shock and one that left me feeling that I really needed to read the next one to see what happens next for Joe. I am amazed I have left it this long to read a Michael Robotham, but I will ensure that all future releases are top of the list!