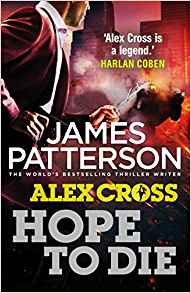 Synopsis: Detective Alex Cross has lost everything and everyone he’s ever cared about.

His enemy, Thierry Mulch, is holding his family. Driven by feelings of hatred and revenge, Mulch is threatening to kill them all, and break Cross for ever.

But Alex Cross is fighting back.

In a race against time, he must defeat Mulch, and find his wife and children – no matter what it takes.

Kat’s Review: It’s been nearly 10 months since I last read a Patterson Book, and 22 months since I last read an Alex Cross novel. Lately I have been a bit despondent with them although to be fair the last Alex Cross novel I read was a pretty good read. With that in mind I decided to fall back into Alex life, which with a Patterson novel is usually pretty effortless. Thankfully James Patterson demonstrates just how easy he finds it as I was plunged straight back into Alex Cross world and the one thing guaranteed to break the man, the loss of his family.

This latest release is book 22 in this series, which in itself is something of an achievement. Alex Cross has become a legendary fictional character and some of his early books from this series are still in my opinion some of the best I have ever read. However the series, along with many other JP books appear to be on shaky ground with fans across the world. I can include myself in that group as sometimes there is such a thing as ‘too much of a good thing’. Thankfully the last book ‘Cross My Heart’ was a vast improvement even though I wasn’t impressed with the ending. When you reached the end it makes it impossible for you to not buy this latest release as there are no conclusions until now. That kind of irritates but enough whining, on with the review of this latest.

With Alex Cross now in a perilous situation, we see him at possibly his most vulnerable. His arch enemy and frankly ruthless killer Thierry Mulch has taken those dearest to Cross, his family and Alex has now become the victim. This makes for an astonishing and very fraught opening with the book and one that has you reading incredibly quickly. Alex becomes a character that we not only know and love, but one that we now see stripped bare.

The book is based on the cat and mouse game between Alex and Thierry and has all the elements for a perfect Patterson/Cross novel. Short, sharp and punchy chapters interspersed with danger and threats from every corner. I have to be honest and say I was pretty gripped with the storyline from start to finish. I felt like this was Patterson going back to his roots and shows all of this authors talents at it’s finest. There were a few minor gripes (hence the 4 and not 5 stars) but overall I felt like James Patterson was finally back to his true style of writing. I found myself eager to get book 23 ‘Cross Justice’ but at nearly a tenner, I think I’ll wait!