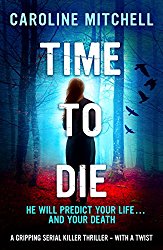 Synopsis: Don’t ever cross his palm with silver.

He will reveal your most shameful secrets.

He will predict your death.

He is hiding a secret.

He is hiding a monster.

And all his predictions come true.

Investigating a series of chilling murders, Detective Jennifer Knight finds herself tracking a mysterious tarot card reader known only as The Raven.

As the death toll rises, Jennifer and her team build a picture of a serial killer on the edge of sanity, driven by dark forces. But these are not random killings. And the method behind the madness could be the most terrifying thing of all … Especially when it seems the death of one of their own is on the cards.

Kat’s Review: As I said before I don’t really read books that feature the Supernatural or paranormal activity. However, when I read Caroline Mitchell’s début novel (and the first in this series) ‘Don’t Turn Around’, I was very drawn to both the characters and story. Caroline Mitchell had managed the balancing act of making it very believable, even to a sceptic like me. Putting the scepticism aside, I just liked the fact that the paranormal side of it was done gently, and there was no sudden drop straight into it. What that meant was for people like me, it gave me time to read about the characters and the area they lived in as well as developing a liking for them (aside from the paranormal element). As soon as I had finished book one, I moved straight onto book 2. Now when I read the synopsis it made my skin tingle a wee bit as I’m not a particular fan of birds. I figured I could manage it and was so keen to get back to the lead character Detective Jennifer Knight I dove straight in.

There was something even more compelling with this second book than the first. Jennifer Knight is now part of a rather secretive team named Operation Moonlight. These coppers within the Police Force in Haven have a somewhat ‘special’ set of skills. We meet recurring characters DC Will Dunston and DI Ethan Cole, both of whom fit well and I hope they continue to be part of this series. We also meet Jennifer’s new boss and a new colleague Zoe (who I REALLY liked). The killer in question goes by the name ‘The Raven’. The Raven makes for a rather creepy and dark killer, and one which can most certainly makes you nervous. He reads Tarot Cards and foretells people’s future, as well as having a rather ‘evil’ undercurrent of a personality.

As the death toll increases, Jennifer battles to try and ‘connect’ with The Raven and maybe be able to make some sort of a breakthrough with the case. It’s all very cat and mouse with Jennifer and The Raven but this builds the suspense and made me read that little bit quicker. I read this book in a day and am so surprised that I have loved these books as much as I have. I can hold my hands up and say I’m a convert to these types of book, that’s for sure!, However I also found that by the end of this book I was scratching my skin, checking out birds WAY more than I normally do and was constantly checking Amazon to find out when the next book is due (who said I was impatient). An absolutely cracking read and I really and truly cant wait for the next one.