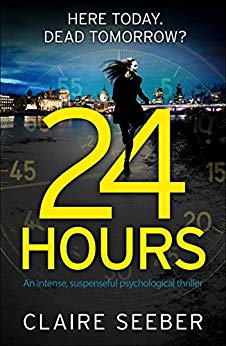 But it was meant to be me.

Now I have 24 hours to find my daughter.

Before he finds out I’m still alive.

Kat’s Review: I haven’t read any of Claire Seeber’s previous books but had seen positive things about her new release 24 hours so was looking forward to reading it. The title says it all, and the book is set over a 24 hour time period featuring Laurie who is racing against time to get to her daughter. This 24 hour time period is set over half the book, and the other half is spent in the past featuring one of each for alternate chapters and this is done incredibly well.

From the early stages we know that Laurie is running, from what becomes clearer with each passing chapter. There is a reason the synopsis is short, and I won’t really say any more about the story itself as that is half the suspense of the book. From the very early stages of the book the tension is ratcheted up and there is a real sense of urgency about everything. It really is quite addictive to read, even with the minor flaws of Laurie making some ridiculous decisions. Somehow though, it kind of makes sense why she is being irrational and certainly didn’t lessen my enjoyment of the book.She write the male characters well and I was so glad that conclusions were drawn at the end, as sometimes not knowing about secondary characters and what happened to them can really irritate!

There is certainly a lot of punch packed into this book, although there were parts in the middle that dragged a little bit. With that aside, the reader is kept guessing and it seems every person in this story appears guilty of something, making it very absorbing. I also really liked her writing style and found I was swept along with the pace of the story and my reading speed seemed to match the speed of the story (well after all I read it within 24 hours!). Although I haven’t given it a full 5 stars this is a solid 4 star read and one that is pretty gripping. I will certainly be keeping my eyes open for the next Claire Seeber.