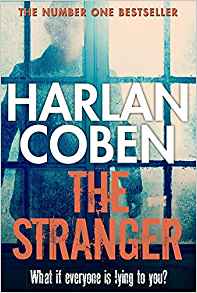 Synopsis: The Stranger appears out of nowhere, perhaps in a bar, or a parking lot, or at the grocery store. His identity is unknown. His motives are unclear. His information is undeniable. Then he whispers a few words in your ear and disappears, leaving you picking up the pieces of your shattered world.

Adam Price has a lot to lose: a comfortable marriage to a beautiful woman, two wonderful sons, and all the trappings of the American Dream: a big house, a good job, a seemingly perfect life.

Then he runs into the Stranger. When he learns a devastating secret about his wife, Corrine, he confronts her, and the mirage of perfection disappears as if it never existed at all. Soon Adam finds himself tangled in something far darker than even Corrine’s deception, and realizes that if he doesn’t make exactly the right moves, the conspiracy he’s stumbled into will not only ruin lives – it will end them…

Kat’s Review: I’ve only read a couple of Harlan Coben’s books but was looking forward to this as the synopsis sounded very intriguing. Adam Price is a normal guy and within the blink of an eye a complete stranger turns everything upside down. Within the first few chapters I was completely drawn into the story and my mind was buzzing with questions. Why would a stranger approach Adam and tell him a secret that could potentially ruin his whole life. Well thankfully Adam has the same questions and he starts to do his own investigating into the Strangers statement.

The story unfolds with The Stranger making even more elaborate statements to other people and before long the plot has more than one thread, and certainly more than one victim. I liked reading about Adam and found myself compelled to carry on, even though at times some of the things were verging on the incredulous! The suspense is ratcheted up enough to hold your interest and the pace was pretty good too so all in all it was a very easy read.

Although I certainly enjoyed this book, I wouldn’t say it had a lasting impression on me. It still merits a 4 star rating but I found that it was one of those books you could take or leave depending on your mood. I have read a couple of other books by Coben and thoroughly enjoyed them so will continue to read his work, and hopefully catch up on the Myron Bolitar series, of which I am a huge fan!