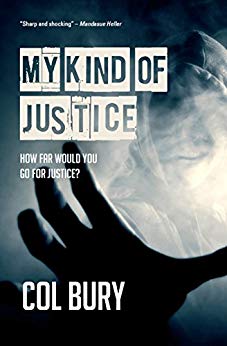 Synopsis: Newly-appointed DI Jack Striker, of GMP’s Major Incident Team, has a dark secret, one that would land him in prison.

Striker’s first case seems a straight-forward gang-on-gang slaying, until a notorious youth is found hanged. Before any chance to investigate, bodies begin stacking-up.

With the hot breath of the brass burning his neck, including hard-faced DCI Maria Cunningham who’s onto him, Striker knows this case will make or break him.  The media-dubbed ‘Hoodie Hunter’ mixes MO’s, leaving few leads, and Striker recognises the work of a highly-skilled vigilante killer. When Striker’s nephew is put into a coma, it becomes personal. Desperate, he runs an unofficial op’ with trusty colleagues, stunning DC Lauren Collinge and un-PC DC Eric Bardsley, placed in the line of fire.

The killer’s trail leads Striker into his own shady past, but will he catch the Hoodie Hunter before he or a colleague becomes the next victim?

Kat’s Review: I love finding new authors and I must say I will certainly be looking out for book 2 in this series. Jack Striker (LOVE this name) is a copper who as it seems throughout this book does a real job of a copper.  He doesn’t have visions, or a problem with authority…he just does his job. He sometimes doesn’t listen but other than that you get a real sense of a coppers job, even with the boring stuff thrown in. I really liked his colleague Bardsley, although I’m a little more unsure about Lauren Collinge.

It seems that in the North of England a vigilante of sorts is taking it upon himself to rid the city of the local hoodlums. However, before long it seems the killer is constantly one step ahead of Striker and he has to tread carefully as his past hasn’t always been so squeaky clean. Col Bury has been careful to make Striker not entirely without fault, but not a Superhero either. It makes for a great balance and makes him an incredibly easy character to read.

The story had pace from pretty early on and there were a few plot twists thrown in when trying to figure out the who and the why. I was pretty engrossed from early on and found myself hoping it stayed that way. Thankfully it did and I found myself racing through this book in a day and a half. I wouldn’t say it’s ground-breaking new story as sadly with this genre the story has been done in some sort of way by somebody already. However, what it was is a solid read and one that made me want to read the next instalment. Another new author for me to add to my list that’s for sure and I’m really looking forward to reading the next one.