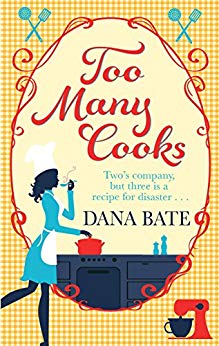 Synopsis: Kelly Madigan seems to have it all: a fabulous boyfriend, a supportive – if eccentric – family, and a flourishing career as a cookbook ghost-writer. But after finding a letter from her recently-deceased mother, criticising her stable but unexciting life, Kelly knows she needs to make a change. When a mysterious new writing opportunity in London presents itself, she jumps at the chance to get away from it all.

Enter Natasha Spencer – Oscar-winning actress and health nut, not to mention a total nightmare. She’s working on a new cookbook and has asked for Kelly’s help. What Kelly didn’t factor in was meeting Natasha’s dishy MP husband, Hugh Ballantine. Away from her family, friends, and the life she knows – will this fish out of water ever get back in the swim?

Kat’s Review: Kelly Madigan is an easy character to like from the get go. With her eccentric family, her steady and likeable boyfriend seems to make her life perfect. However, when her Mum passes away she leaves Kelly a letter which tells her to get out there and cause some waves in her life and not to settle for the easy option. This sets Kelly off on a chain of events which see her take some drastic decisions including upping and moving to London to work as a ghost-writer for a celebrity writing her own cookbook.

Enter Natasha Spencer, the sort of celebrity fictional character I love to hate. She appears to have it all, looks, fame and money but seriously lacks in personality. Kelly is instantly dwarfed and overwhelmed by her new employee. In addition to Natasha she also has to put up with her ridiculous assistant Poppy who just adds to the hilarity of Natasha’s over inflated sense of self. Natasha, although everything people probably imagine some celebrities to be like, make the book so much more readable and there is nothing like a bit of backstabbing and bitchiness to liven up a book. I also loved some of the one liners that Kelly’s friend Meg came out with, it injected a real laugh out loud element to certain parts of the story.

When Kelly meets Natasha’s husband MP Hugh Ballantine things get even more crazy and before you know it Kelly feels a million miles away from home and incredibly lonely. The characters, the cooking and the general air of drama and humour around this book seems the perfect combination to me. I enjoyed Dana’s first book, but not as much as this one. Once I was into the story I didn’t want to put it down. A fantastic read which I thoroughly enjoyed and cannot wait to see what’s next for Dana Bate.