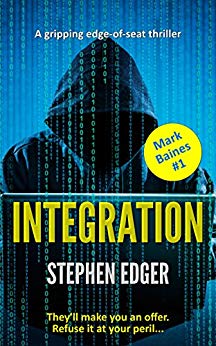 Synopsis:  THE OFFER- Mark Baines is a Team Leader in a call centre. He dislikes his job and dreams of the day he can afford to give up his job and buy the house of his dreams. Following a terrifying burglary at his home, he is contacted by a group prepared to pay him one million pounds in return for a favour.

THE CATCH – The offer seems too good to be true, and he begins to worry about what they might expect in return. The group calls again and tells him to integrate their laundered monies through the bank he works for, but he refuses. When Mark’s girlfriend Gabrielle goes missing and his brother is attacked, Mark begins to realise just how far the group will go to get what they want.

EVERYONE HAS THEIR PRICE – As the game begins and the pressure mounts, Mark finds himself risking everything he has to find Gabrielle and save his own life before the group and the police catch up with him.

INTEGRATION – Blackmail, murder, suspense, conspiracy and money laundering: Integration is a British crime thriller set in the murky depths of the finance industry.

My Review: The synopsis on this sounded good and I was looking forward to getting started. It was a very easy read and instantly you can’t help but like Mark Baines, just because he is an ordinary bloke. He’s got a normal job, house and friends and could easily be somebody you know. When he is burgled he thinks it’s just bad luck and tries to get over it and carry on with his normal routine. However, when he receives a strange offer from somebody claiming to wipe his debt and pay him £1,000,000 he figures it’s all a joke. From that point on things take a rather bizarre and worrying turn.

What seems like a simple choice ends up starting a ridiculous chain reaction that will literally change his life forever. The writing was great and picks up pace as the story progresses. I certainly liked Mark as a character and I was pretty enthralled from the beginning. Having read previous reviews of this book some people say that the premise is over the top and ridiculous. I understand why some people would think that, but this is fiction. I read books such as Simon Kernick’s which sometimes border on the unrealistic, but I love them. For that reason I think this book falls into the same category. Yes it may seem implausible, but if I wanted to read something ‘true to life’ I’d be reading a Biography (yawn).

The story literally had me grabbed and I just couldn’t believe how much of a mess Mark ends up in. The other addition to the story was a character DC Ali Jacobs. She was a great addition and made it all the more interesting. Was this a little farfetched? Yes. Did I care? No. Did I really enjoy it? Yes without a doubt. I think this was a cracking story; no, it’s not the best I have read in this genre but a worthy addition to your Kindle. The other bonus about this was that the first book finished on somewhat of a cliff-hanger meaning I HAD to read the next one. I would definitely recommend this, especially as it’s less than £1 currently on Kindle.