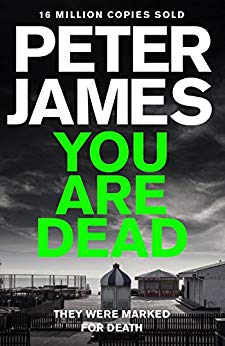 Synopsis: THEY WERE MARKED FOR DEATH. The last words Jamie Ball hears from his fiancée, Logan Somerville, are in a terrified mobile phone call. She has just driven into the underground car park beneath the block of flats where they live in Brighton. Then she screams and the phone goes dead. The police are on the scene within minutes, but Logan has vanished, leaving behind her neatly parked car and mobile phone. That same afternoon, workmen digging up a park in another part of the city, unearth the remains of a woman in her early twenties, who has been dead for 30 years.

At first, to Roy Grace and his team, these two events seem totally unconnected. But then another young woman in Brighton goes missing – and yet another body from the past surfaces. Meanwhile, an eminent London psychiatrist meets with a man who claims to know information about Logan. And Roy Grace has the chilling realization that this information holds the key to both the past and present crimes . . . Does Brighton have its first serial killer in over eighty years?

My Review: <HUGE sigh>, I’m not sure where to start. Peter James is a bit of a Legend in my eyes. He is one of those authors that everybody knows; the man is most certainly one of my favourites. The one small problem I have, and have continued to have with the last few books is the ongoing storyline involving his missing wife Sandy. Now for people wanting to start the series from the beginning and haven’t yet got around to it, please don’t carry on reading my review because it will no doubt contain spoilers (this also applies to people who haven’t read the latest book as things mentioned in my review refer to those events, and I HATE a spoiler.

Roy is back and is dealing with a number of big changes such as a new son, moving house and dealing with the loss of a colleague. To pick up a new Roy Grace feels like meeting up with old friends and this one is no different. Both Roy and Glen (his colleague) make these books along with a few favourites such as Norman Potting, and the ones I can’t stand such as Roy’s new boss Cassian. This new book actually opens with a pretty hair raising and dramatic abduction of Logan Somerville and the pace is pretty frantic in the beginning. In the same afternoon the discovery of remains underneath a path which look to be thirty years old mean that Grace and his team have a lot of work on.

The storyline was certainly woven with enough mystery and intrigue to keep me turning the pages and once again we see flashes of potential closure regarding Roy’s missing/presumed dead wife Sandy. As these parts of the story (albeit small parts) were revealed I was once again hoping that this element of the storyline would be concluded. Sadly, I was mistaken! Back to the main events in the book and it seems that Roy’s work life is overtaking his ability to control his personal life. I love the fact that we see both in this series. The other thing that I think is absolutely brilliant is that you get a real feel for the actual police work that Roy and his team have to go through. There is no magical ‘tah dah’ moment where Roy cracks the case as if by magic. It’s done and the story told with all of the team working and pulling their weight. This gives a real authenticity to the story as well as previous books which I love.

Sadly, I figured out part of the story towards the end but actually liked the way the story was wrapped up. However, the reason for the 4 stars and not 5 is this whole Sandy thing. I’m not entirely sure whether this is a conclusion to it, but am pretty sure it can’t be…can it? It was one of those moments that seem a little bit like a cliff-hanger. Or was this PJ’s way of closing the chapter on it all. Because I’m really not sure I don’t quite know how I feel. If this is PJ’s was of closing it, then I feel cheated. If it isn’t then I am so bored of waiting for it all to go belly up. Either way I am still a little bit confused. That aside, another really solid read once again from the main man!