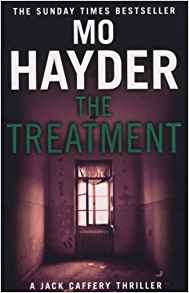 Synopsis: A quiet residential street in south London. A husband and wife are discovered, imprisoned in their own home. Badly dehydrated, they’ve been bound and beaten. He is close to death. But worse is to come: their young son is missing. When Detective Inspector Jack Caffery is called in to investigate, the similarities with events in his own past make it impossible for him to view this new crime dispassionately. And as he digs deeper – as he attempts to hold his own life together in the face of ever more disturbing revelations about both his past and his present – the real nightmare begins

My Review: I have literally <insert shocked expression here, I know> started reading Mo Hayder. Why? Hell, I have no idea! As soon as I had finished book 1 I just knew I had to go on to book 2. There is however, something I feel I should point out about this book. It is DARK, and I mean dark. It covers subjects (such as child abuse and paedophilia) so if you haven’t the stomach for that sort of story please don’t read it, as it will no doubt disappoint and upset. Although the subject matter is awful, Hayder has a certain flair for making you, frankly scared witless! She has a rather dark manner about her books but they also show huge flair and skill which makes for a shockingly gripping book.

Jack Caffrey as the lead is a great character, but I tend to swing between loving him, and wanting to smack the shit out of him! Following on from book 1, I wanted to know more about his dark past and his gripping addiction with finding out what happened to his brother many years before. Thankfully this part of the storyline is dealt with and makes for a huge chunk in working out just how screwed up Jack has become. That aside, the book starts us off with a shocking and disturbing scene in South London. It’s always a bonus when a book is set in an area you know as you find yourself naturally gravitating there in your imagination. Jack and his colleague Danni (who I really liked) investigate a missing child. His parents are found bound and beaten in their own home with no sign of their young son.

What follows is a disturbing but weaving and layered plot that will keep you guessing about who is involved and why. This was another Mo Hayder book that I really didn’t want to put down. She has a very descriptive way about scenes which can have you coming out in goose bumps, to the point where I wondered how far over the line this had to go to become a horror! I found myself turning the pages with rapid speed and as dinner went unchecked, and the bath left on I continued right to the end. When I had finished I realised although I loved it, the first book slightly edges over the second, but all the same I HAD to have book 3 ready. Luckliy I have the rest of the series ready to catch up on, which I fully intend to do ASAP!