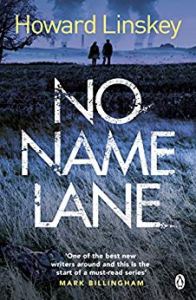 Synopsis: Young girls are being abducted and murdered in the North-East. Out of favour Detective Constable Ian Bradshaw struggles to find any leads – and fears that the only thing this investigation will unravel is himself. Journalist Tom Carney is suspended by his London tabloid and returns to his home village in County Durham. Helen Norton is the reporter who replaced Tom on the local newspaper. Together, they are drawn into a case that will change their lives forever. When a body is found, it’s not the latest victim but a decades-old corpse. Secrets buried for years are waiting to be found, while in the present-day an unstoppable killer continues to evade justice…

My Review: I was pretty excited to read this latest release by Howard Linskey. I have read all of his previous books but knew that this one would be slightly different. First up massive congrats on the cover because I love it. Once I got started the story seemed to flow just as well as previous ones which is always a bonus. The main premise is that young girls are being abducted and murdered in the North-East of the country.

DC Ian Bradshaw is a copper that is currently out of sorts at work. Following an incident he seems to be a shell of the man he once was. The first thing that struck me was how much I disliked this guy. He oozed the whole ‘poor me’ routine and I found myself wondering what on earth Linskey had done introducing such a wet character to one of his books. Luckily the balance was tipped for me with the introduction of Tom Carney. Tom is a journalist in London who manages to get himself in a bit of hot water. He leaves London and makes his way back to his home village not realising that this may be a blessing in disguise.

Characters aside, the story has a couple of threads both which made for great reading. The first being the case involving the abducted children, and the second being the discovery of decades-old corpse. Tom gets his teeth into the body found in the village and manages to pair up with young Helen, who is a journalist working for the local rag. Both Tom and Helen really added some flavour and spice to the mix, which sadly Bradshaw seemed to drain in equal measures.

I really enjoyed the story, and the writing was just as great as it has been in his previous books. There were plenty of plot twists and a couple of surprises I certainly didn’t see coming. I think this is a book you can certainly get your teeth into. However, although I loved this Ian Bradshaw as a character literally redeemed himself by the skin of his teeth towards the end of the book. Aside from that I spent the best part of the book loathing the man. Sadly my pure disinterest in this guy made me bump it from a 5 star read to a 4 (sorry Howard), but other than that another fantastic read.