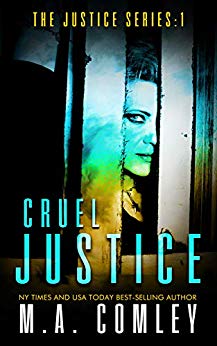 Synopsis: The headless body of a wealthy widow is discovered decomposing in Chelling Forest. Then a second victim is found. Detective Inspector Lorne Simpkins and her partner, DS Pete Childs are assigned the case.

Before they can discover the identity of the killer they must make a connection between the two victims.

After a third murder, Lorne receives a grisly surprise. Clearly, a vicious serial killer is on a rampage…and Lorne has become the killer’s fixation.

Lorne can’t allow her failing marriage or her new boss–a man with whom she shares a sensuous secret–keep her from focusing on her job. She must catch the macabre murderer, or risk becoming the next victim.

My Review: I was looking forward to reading the first in the Justice Series by Mel Comley as I keep seeing such great things about it. I am however very behind considering I think she has now released book 10 in the series’ most recently. Detective Lorne Simpkins is the main lead of this series and it seems from the very beginning that all is not well in her marriage. Along with her partner DS Pete Childs they seem to work long and laborious hours. When a headless body is found, it seems their next long and arduous case has been found.

I certainly liked Lorne however although she was a good character and the writing was pretty good, there were parts of the story that felt a bit too stilted and maybe not as realistic as they could have. We meet additional characters but none that leave you wanting to know too much more. The story was interesting and certainly kept me reading, but there were parts that just weren’t authentic enough for me.

Having said all of that, the writing was great and flowed well and although Lorne may not be a favourite character she held my interest. I think that this is a great start to a series, and am pretty sure that Mel Comley, like other authors has just improved with each book she writes. I am actually looking forward to how this series progresses and have already ordered book 2. Certainly a series that has a lot of potential and is great for people looking for new authors.