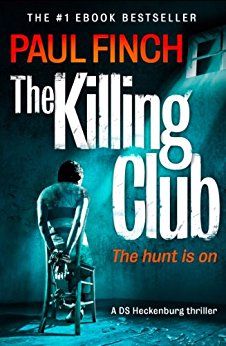 Synopsis: DS Mark ‘Heck’ Heckenburg is used to bloodbaths. But nothing can prepare him for this. Heck’s most dangerous case to date is open again. Two years ago, countless victims were found dead – massacred at the hands of Britain’s most terrifying gang.

When brutal murders start happening across the country, it’s clear the gang is at work again. Their victims are killed in cold blood, in broad daylight, and by any means necessary. And Heck knows it won’t be long before they come for him.

Brace yourself as you turn the pages of a living nightmare. Welcome to The Killing Club.

My Review: Paul Finch’s series of books featuring DS Mark Heckenburg (otherwise known as Heck) started with book one featuring a nasty bunch of killers named The Nice Guys. The Nice Guys were a horrific bunch of people who ran a ‘rape-for-hire’ business catering to the most sadistic of men. In the first of the series (entitled Stalkers) only one person ended up being behind bars and that was Peter Rochester. Between Heck’s boss DS Gemma Piper and the lead guy Frank Tasker, part of the Serious Crime Unit they are desperately trying to get some insider knowledge from him, with a view to shutting down the Nice Guys for good.

What actually happens is that they manage to set off a chain event which is nothing short of an absolute cluster fuck. As with Finch’s previous books there are more bodies than most people have hot dinners. In addition to this you get a serving of violence, a handful of plot twists and a dash of gore. The book certainly ratchets up the dial in terms of suspense and it’s incredibly fast paced. The writing was great and you feel yourself being pulled into the story for the very beginning.

For me though, it’s all about the characters. Now Mark Heckenburg on paper appears like many other typical Crime leads (especially where coppers are concerned). I have now realised (by the very end of this book) that Heck is a little bit special. He may appear to be like many others on paper, but in reality this is a bloke that actually doesn’t give a shit either way. Heck has some serious attitude, without appearing cocky. This latest Heck book also takes him head first into the danger zone and although he is by no means Rambo, the boy can look after himself. One thing I noted (and loved) was that there were a few situations where you realise Heck is almost at the point of giving up, and sometimes he just gets lucky. It’s nice when there isn’t always a character solving an issue because he knows everything, he is just damn lucky.

There were loads of plot twists and believe me you wont have time to put this one down and ‘go back to it’. Its one of those you just have to keep reading. I thought this was a great book absolutely packed full of action and a thoroughly enjoyable read. However, Stalkers still holds the edge as my favourite out of the three. The ending to this latest book was also fabulous and it’s made me want to read the next one even more.