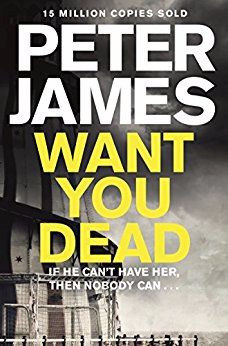 Synopsis: IF HE CAN’T HAVE HER, THEN NOBODY CAN…Virtual romance becomes a terrifying obsession in Want You Dead…Single girl, 29, smouldering redhead, love life that’s crashed and burned. Seeks new flame to rekindle her fire. Fun, friendship and – who knows – maybe more? When Red Westwood meets handsome, charming and rich Bryce Laurent through an online dating agency, there is an instant attraction. But as their love blossoms, the truth about his past, and his dark side, begins to emerge. Everything he has told Red about himself turns out to be a tissue of lies, and her infatuation with him gradually turns to terror. Within a year, and under police protection, she evicts him from her flat and her life. But Red’s nightmare is only just beginning. For Bryce is obsessed with her, and he intends to destroy everything and everyone she has ever known and loved – and then her too…

My Review: What is going on with this series? I need to clarify that I have read every one of the Roy Grace series and have loved them all (Dead Simple book 1 being my all time favourite). However a few things have been going on that have narked me, one of them being the ongoing saga of Roy Grace’s missing/presumed dead wife Sandy. More of that later, but in the meantime I was brimming with excitement at having this latest release nearly 2 months early. I immediately got stuck in and as usual the story took me away to that dark and murky corner of my mind which enjoys reading about other people’s misery. For those of you that maybe haven’t read any of these books I suggest you stop reading my review as it will inevitably contain spoilers if you are not up to date with the series. We are up to book 10 in the series and Roy Grace is on the verge of getting married to Cleo and they have a young baby son. In addition to Roy we see the other characters that us readers have grown to love such as Glenn Branson and Norman Potting return.

We meet the lead in this current story Red Westwood (GREAT character name dontcha’ think) as she is recovering from her past disastrous relationship.  Bryce Laurent is the man responsible for ruining her life a year earlier and she had no idea that in the short space of time she knew him he would turn out to be so toxic. In the present time Red is living under police protection and trying to move on without him in her life. I liked Red instantly, but on the down side by a quarter of the way through I was beginning to wonder whether I was actually reading a Peter James book. We don’t even see Roy Grace appear until that point and it was only then that I felt myself feeling much more settled. When a body turns up that is linked to Red Westwood the police aren’t altogether convinced that its anything more than coincidence. However, before too long things continue to get more and more nasty for Red and Roy soon realises that Bryce is a major issue.

Alongside the main storyline (which isn’t necessarily PJs strongest I must say) we see Roy try and prepare for his wedding to Cleo. One of the major pulls with the series in the ongoing drama with his long missing wife (now presumed dead). I was under the impression that this element of the story would be completed by now and was hoping that this book would bring closure to that element as I am tiring of wondering. However, once again we only see the briefest glimpses of what happens, and I was absolutely gutted at how this has once again been left open ended, and maybe open to interpretation by the reader. Although it may seem like it’s all negatives I’m spouting off it really isn’t like that at all. I guess with Peter James you expect perfection every time (so no pressure there Peter), and I tend to be a lot more critical with longer established writers.

Even though there were certain things I didn’t like about this story, there were also some major OMG moments too, and all I can say is “Peter James, how could you have done that”. Major story shocker for one character involved and I thought it was so sad I could have cried (I didn’t though I assure you). Overall the writing style is pure Peter James and flows smoothly, with enough pace to keep you hooked. There were some magical jaw dropping moments proving that Peter James is the King of the Castle when it comes to this genre. I managed to read it in two sittings and although not one of my favourites still a great read.