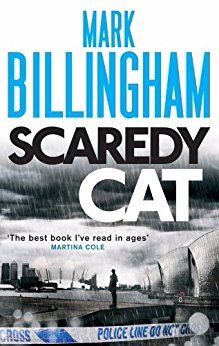 Synopsis: It was a vicious, calculated murder. The killer selected his victim at Euston station, followed her home on the tube, strangled her to death in front of her child. At the same time, killed in the same way, a second body is discovered at the back of King’s Cross station. It is a grisly coincidence that eerily echoes the murder of two other women, stabbed to death months before on the same day… It is DI Tom Thorne who sees the link and comes to the horrifying conclusion. This is not a serial killer the police are up against. This is two of them. Finding the body used to be the worst part of the job. Not any more. Now each time a body is found, Thorne must live with the knowledge that somewhere out there is a second victim, waiting to be discovered. But the whilst the methods might be the same Thorne comes to realise that he is hunting two very different killers. One is ruthless and in control, while his partner in crime is submissive, compliant, terrified.

Thorne must catch a man whose need to manipulate is as great as his need to kill; a man who will threaten those closest to Thorne himself; a man, who will show him that the ability to inspire terror is the deadliest weapon of all…

My Review: Okay so I know this is only my second Thorne book, but in comparison to the first book this one didn’t have as much, shall we say shine, as the first one. In the first book I was quite gripped, but with this one the first quarter of the book seemed to be quite hard going. The things I love about a series, and this one as well is getting to know characters. Thorne is actually quite a hard character to get to grips with, but I actually like him more for that reason. I’m also quite fond of his colleague Holland, and in this book we see more of him than in book 1.

This latest case involves not one but two killers and the key to it all is what they struggle with. As usual the murders themselves have an air of creepiness about them (which is always a bonus in my eyes) but the actual story felt a bit boggy. I apologise for my descriptions (this is why I am a reader and NOT a writer). Do you know what I mean though, you are enjoying it, but you just feel like its all too much effort?!?

The only other reason I didn’t enjoy this as much is that I had worked the killer out by just after the halfway mark. I know this is sometimes a sticking point for people, and sometimes it irritates me and other times not so much. I think the fact that this story was plodding rather than racing, meant I fell into the ‘irritated’ group for guessing the killer. That aside, there are flashes of genius in the writing and I can see that this series is one that I bet will improve as time goes on. Although this was just middle of the road for me I’m actually looking forward to book 3.