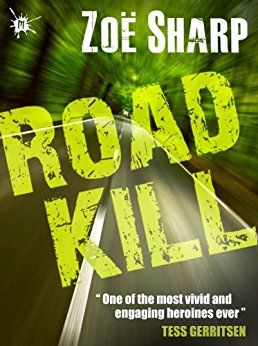 Synopsis: “If you stay involved with Sean Meyer you will end up killing again,” my father said. “And next time, Charlotte, you might not get away with it.”

Still bearing the emotional scars from her traumatic first bodyguarding job in the States, Charlie Fox returns to her former home to try and work out both her personal and professional future.

Instead of the peace for which she’s been hoping, Charlie is immediately caught up in the aftermath of a fatal bike crash involving one of her closest friends. The more she probes, the more she suspects that the accident was far from accidental − and the more she finds herself relying on the support of her troubled boss, Sean Meyer, despite her misgivings over the wisdom of resuming their relationship.

And Charlie’s got enough on her plate trying to work out who suddenly wants her dead. The only way to find out is to infiltrate a group of illegal road racers who appear hell-bent on living fast and dying young.

Taking risks is something that ex-Special Forces soldier Charlie knows all about, but doing it just for kicks seems like asking for trouble. By the time she finds out what’s really at stake, she might be too late to stop them all becoming road kill.

My Review: Well, it has been far too long since I spent time with Charlie Fox in book 4, and it appears that I even forgot to review it (I know…duh duh duh…shock horror). Anyway, I decided to delve back into Charlie’s world and get back in touch with the all too fierce Charlie and Mr Sean Meyer. For those that haven’t read any of the books in the series, I warn you now DON’T CARRY ON READING! Ultimately there will be spoilers because you have no knowledge of what has gone on beforehand. Also, I might like to point out, if you are one of the few that haven’t read them…why not? You are missing out!

Anyway, the first thing I felt when I opened the book and started was like I was visiting friends that I hadn’t seen for ages. The book starts out ratcheted up to full drama with Charlie’s friend Claire ending up in hospital following a fatal bike accident. With one person dead and her friend being operated on Charlie realises that the ‘accident’ appears to be far more sinister. Of course Charlie decides that she needs to not only help her friend, but get to the bottom of why. Enter Sean Meyer, Charlie’s boss and you have yourself a rather hairy situation that rapidly gets more mysterious.

Before long Charlie is in the thick of a group of illegal road racers and her friends seem to be involved somewhere along the line, she just has to figure out how. The one thing that is glaringly obvious from this book, a lot more than previous ones is Zoe Sharp’s love of bikes. This journey sees Charlie heavily involved in an illegal bike racing gang and by the time I was halfway through, I reckon I could have told you more about riding a motorbike from half this book, than I have known in my entire 30 plus something years on this planet. This certainly wasn’t a negative in my opinion, if anything it just makes you realise how passionate these riders are (as I’m guessing Zoe herself is too).

As with any Sharp/Fox book, Charlie inevitably gets herself into some very dangerous situations, which makes for a pretty tense read. The actual storyline itself maybe wasn’t my favourite in the series so far but was a brilliantly good read as usual. I know that I have over 150 books left in my ‘to read’ pile, but for some reason I think I need to go straight to book 6 in this series (it’s definitely been too long). Zoe Sharp has created a great lead character, and has produced consistently solid reads to date. I’m already looking forward to the next one