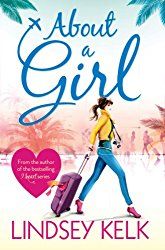 So I recently discovered that I was extremely behind with my reading and promptly picked up the last book Lindsey released in the I Heart Series and absolutely LOVED it! With Angela Clarke, the heroine of the series, fresh in my mind I wondered how I would feel about reading a Kelk book that didn’t feature Angela. I needn’t have worried.

Tess Brookes is a girl that likes to plan everything. From the very beginning I absolutely loved Tess. She is different from Angela Clarke, but a character I can see running for a long time! When her planned life starts to fall apart, Tess finds herself in an unusual position. She is without a job, hates her flatmate, and has had a fall out with her friend Charlie.

All in all life is not going to plan so when her demon flatmate Vanessa’s phone rings Tess answers it. In that split second she takes the ‘bull by the horns’, and decides to become somebody else. She pretends to be Vanessa, and finds herself on a plane, on the way top Hawaii, to do Vanessa’s job which just happens to be a photographer. Yes I know it all sounds crazy, but when you read the first few chapters it really isn’t that crazy at all. I was willing her to just go for it and I’d only known Tess for all of a few chapters!

As usual (with any Lindsey Kelk book), I was giggling like a schoolchild. I found the dialogue between some of the characters hilarious. The characters that featured also made the book so great. Nick was the journalist who turned up in Hawaii to help with the shoot and inevitably that causes Tess a whole host of problems. Then there is her new best friend Paige who is the creative Director. However, Kelk still made room for Tess’s slightly mental but absolutely brilliant best friend Amy. I normally don’t quote from books, but the last two Kelk has produced leaves me no other option! “The Andrex puppy had morphed into a Rottweiler and Cupid had traded his bow and arrow for an AK-47”. See what I mean, flipping brilliant!

This is what makes Lindsey Kelk’s books just that little bit moiré fabulous than others. She creates crazy characters that you end up wanting as your own best friend! From start to finish this book was absolutely brilliant. Yep, it certainly has an element of ‘un-realism’ (if that’s even a word) in them, but that’s why I read books like this.

I was truly sad to finish this book but have to say Kelk has managed to create another book that leaves you exasperated that you can’t reach out for the next one in the series. A perfect summer beach read that will have you giggling like a teenager into your Margarita!