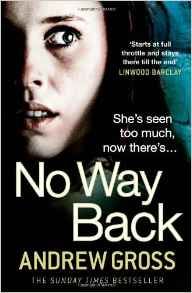 I first discovered Andrew Gross as he co-writes with James Patterson. Following on from those books I picked up his novels …written by him alone and featuring Ty Hauk (major character crush going on there!). I have since read all of his books that he has written alone and with the exception of one have enjoyed all of them. His last release ’15 Seconds’ was a “hang on to your seat” kind of book and I was hoping his new one would be just as good. Thankfully Mr Gross has come up trumps once again with this newest release of No Way Back.

One thing I would point out (although minor I know) is that some people may mistake this book for his last as the covers are similar at a glance. I know this is minor but can’t help but feel it may make some people skim past it online, thinking they have already read it, which I certainly wouldn’t recommend! Wendy Gould and Laurita Velez are the two main characters in this new book and their worlds will become terrifyingly dangerous as the book starts as a pretty fast paced read from the get go!

Wendy Gould was an average mother, however now she’s the sole witness to the murder she’s being framed for. The first few chapters see Wendy in a hotel bar, and the shocking thing is that it could be any woman out there. Her situation is one that many people could have been in that day, only Wendy (thankfully fictional) was the one that happened to be in the wrong place at the wrong time. It takes mere three or four chapters for me to realise that this latest Gross book is no less thrilling than the last.

Lauritzia Velez is a suburban nanny with a tragic past and a terrifying future. After another attempt on her life, she once again leaves everything she loves behind to go on the run. Both women know too much and have no idea just how much their worlds will clash. Both characters drew my attention from the early days and as both women find their worlds becoming more and more dangerous, I found myself reading quicker. Having started this book yesterday morning, I finished it by the time I had to go to sleep. It was a book that was full of threads that have you questioning who is involved and why.

I found myself having to pay close attention in the latter part of the book as there are so many potential characters involved and different threads that are all intertwined. The book held my attention from start to finish and there were plenty of twists turns and surprises that I thoroughly enjoyed each and every page. I almost feel like the more Andrew Gross writes, the better he gets. This is certainly a thriller that has all the right ingredients, and one that will keep you up into the small hours reading. I still await the return of my character crush, with a new book featuring Ty Hauck, but until then am keeping myself occupied with his fantastic stand alone novels. Highly recommended!