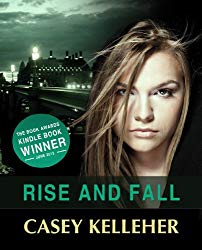 After reading Casey’s debut novel Rotten to The Core I was really looking forward to her second book. Her first and second books were self-published and after her debut novel sold more than 20,000 copies (I’m not surprised there) she was `snapped up’ by an agency (yay). Her first book was really good and you could tell that she was aiming for the same type of feel to her books as some of the bigger British Crime legends such as Mandasue Heller, Kimberley Chambers and Martina Cole. The writing was good, the story was great and overall it took me now time to finish.

When I started her new book I have to be honest and say I wondered if she could produce second good book. Was it a one off her original book, or would she rise to the occasion. Thankfully <clapping hands in glee> Casey Kelleher has produced a book that is better than the first! Jamie Finch is a fifteen year old that leaves home and tries to make it on his own. He approached Gary West and a few years later we see him as an integral part of Gary’s firm. Sadly for Gary and Jamie, Jerrell Morgan is the new kid on the block and he is causing havoc. Being born and raised in Jamaica, Jerrell has come to London to take out other firms and lead it all his was. He has no issues with doing things the hard and violent way and makes this known to everybody.

I have to say that I immediately loathed Jerrell and got a real sense of the danger lurking behind his personality. I found myself a few times leaning forward and turning my pages with a bit too much haste (I get like that when things get a bit tense)! The characters Casey has created are very believable and I liked the fact that we got to see the nicer side ti both Gary and Jaime. There was plenty of action and lots of dramatic events. One word of warning though, Casey does touch on a pretty sensitive subject in the book (hard to say what without spoilers) so if you are of the sensitive nature, please don’t moan about it because I have warned you! Having said that, it’s in keeping with the story and to be honest it just made me want a certain type of outcome even more!

Overall, I am thought this book was even better than her debut and think it won’t be long before Casey can join the ranks amongst some of the other legends of British crime such as Lady Heller, Kim Chambers and Martina Cole. Casey, just keep `em coming and your fans will follow, just hurry up and get the next one written!!!

One thought on “Rise & Fall by Casey Kelleher”