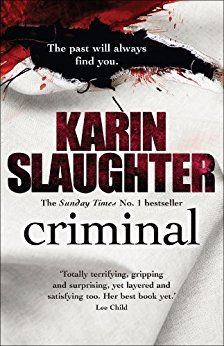 Kat’s Review: Okay I’m really not sure where to start with this review as I feel completely at odds with how I normally feel after finishing a Karin Slaughter book. A quick re-cap for those maybe not in the know might help. Karin Slaughter created a series of books called Grant County and then another series featuring Will Trent and Faith Mitchell. In a surprising (but genius) move Karin Slaughter managed to turn the two series into one and they became known as The Georgia series. It was an incredibly risky move as some fans had become attached to various characters. Even for me I found it hard to believe that she had done such a thing; however her last release entitled Fallen showed just how clever Karin Slaughter really is. Without adding too many spoilers for those wanting to read the series from the beginning, I will just say the series currently features Will Trent, Faith Mitchell and Sara Linton. For her fans that have followed from book 1 there were many questions that have come up over time and this book is the one to address some of them.

The book is split into two parts almost, one featuring Will, Sara and Faith in the present day and the other featuring Amanda Wagner (Will’s boss) and Evelyn Mitchell (Faith’s mother) set in the seventies. In the beginning I was more drawn to the present day element and at the halfway point was wondering what was going on. Why was I not getting into the book as much as I normally did? I realised at just past the halfway mark that it’s because I am an impatient woman! The story featuring Evelyn and Amanda makes so much sense especially towards the end. The crimes are as ever gruesome and I found the authenticity of women in the police force back then kind of shocking.

The story itself was as usual great, but for me I felt like I was more interested in the answers to my questions and thankfully by the end so many things clicked into place. I wouldn’t say that this story was as good as Fallen (I forgot to turn my bath off whilst reading that one!) but as ever is fantastic writing and for fans who have followed the series, is a crucial part of the series. Will, Sara and Faith do not feature as heavily but it makes perfect sense as we see the reasons for where some of them are today. I think that although this isn’t my favourite Karin Slaughter book it just shows how talented a lady she is. Another winner from the leading lady in this field!

One thought on “Criminal by Karin Slaughter (Will Trent #6)”