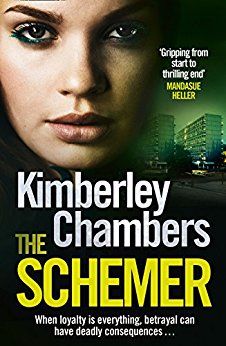 Well, well, well. When I realised that I was getting my hands on an early edition of Kimberley Chambers new book, to say I was excited is a bit of an understatement. For the benefit of those that haven’t maybe read her books before you may want to know a bit more. Kim wrote and published her first book Billie Jo back in 2008. She then went on to write another two books before releasing the first in a series of books (The Feud being the first) featuring the O’Hara and Mitchell family. The release of The Victim (the third in that series) in 2011 was an absolutely brilliant book and I couldn’t have imagined she could ever top the characters she had created, but somehow she has. Kimberley Chambers has made a niche for herself and is now in my opinion as good as (if not better) that the more infamous British crime writers such as Martina Cole.

Sadly, many people have never heard of her and this is where people like me come in. My one true love is reading, and when you find a writer like Kim that writes books as good as hers you feel the need to share it with people. No, I am not paid by Kim or her publicists; I am just a true crime book lover. If you want a typically English bit of grit with a few gangsters thrown in then these are the books you should be reading.

The Schemer starts off by introducing us to Stephanie Crouch in the eighties. The first few pages had me laughing and reminiscing at the same time as Kim’s descriptions of being a teenager at that time was absolutely spot on. It had the kind of feel that the new release of the film The Firm had. We get to see her older sister Angela and her mum living in their grotty council house with the rather colourful characters that live in their road! Pretty soon we meet East-End boy Barry who as a teenager falls head over heels in love with Steph. Sadly, their love is to be tested as Barry is taken to live in Spain with his Mum and new boyfriend. Steph then turns to Barry’s friend Wayne and they soon move from friends to lovers and all thoughts of Barry leave Steph’s head.

The book then moves to ten years later and we see the downside to Steph’s decisions that she made as a teenager. This book had me absolutely gripped from the very first page to the very last page. All of the characters in this are absolute crackers and they each have their redeeming qualities. One thing I really need to point out is that if you are not a lover of a lot of swearing, then maybe this book won’t be fore you. As a South London girl that swears like a sailor, it doesn’t bother me in the slightest. One thing that really struck me was that although the characters are brilliant and the plot and storyline fantastic, the book certainly isn’t without its humour.

There is one particular character by the name of Marlene that had me cringing and laughing in equal measures. The other thing that I really noticed about this book is that Kimberley Chambers has created characters that you can start off loving and end up hating. In the case of this book I am still not sure how I feel about either of the men featured and I really want to keep reading about both of them to see how it pans out. Thankfully, the ending of this book is so open-ended it’s unreal. This is the best opener for the next book and to be honest I’m a little bit irritated I have to wait so long to find out!

Either way, I truly think that Kimberley Chambers is a good reason to highlight female British crime writers. Kim Chambers has not only earned her place as one of the Queens of British Crime, she is keeping it with this latest book as proof that she deserves to stay up there. All I can say is that if you haven’t read her books before, I suggest you start now. If you have and you are keenly awaiting the next one, you will NOT be disappointed. Roll on the next one!

2 thoughts on “The Schemer by Kimberley Chambers”