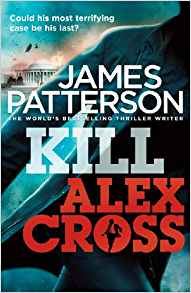 Mmmmm, let me think on it for a minute. I feel very torn trying to write a review on this book and if I am being honest I really wanted to like it. Like many readers, when you have read a series as long as this you want things to be great all the time, but inevitably there will come a point when maybe things just don’t sit right any more. I think that maybe I am leaning towards that opinion more than anything right now. Cross Country I absolutely loathed, I, Alex Cross was better but certainly not his best. With this one, I just feel it was mediocre.

The story itself had all the right ingredients, the kidnapping of the two most famous children in America and a terrorist attack on D.C. But somehow it just seemed too much like we had been there before and Alex Cross is maybe going over old ground. The writing style still has the magic Patterson touch with the short sharp chapters that keep the pages turning. That certainly wasn’t lacking, I just felt that there was a major `something’ missing and I cannot for the life of me place exactly what it is.

The character himself was lacking the magic sparkle this time around and I didn’t particularly think he was written in the same manner either. Alex Cross has always been a man who works hard, but this time round his family were a very poor second to his work and that made me think badly of him.

I know it sounds ridiculous to some, but when you have read 18 books over as many years, as a reader you feel you know the character. I certainly finished this book feeling like I didn’t know Alex Cross at all. The terrorist element of storylines in general is wearing a little thin with me as there seems to be so much of it around. I also felt that this part of the story, although very realistic, was a little rushed, and almost like an afterthought to bump the original storyline up a notch.

I am left feeling like I don’t know what just happened. Has Alex Cross finally run out of cases to solve, or has Mr Patterson bitten off more than he can chew with the amount of books he writes and co-writes? In my opinion it has to be one of the two, I just can’t make my mind up which one it is!