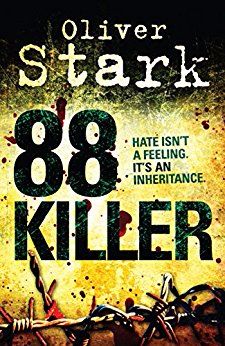 Oliver Stark released his debut novel American Devil in 2010 which I devoured and absolutely loved. Sometimes when an author produces such a great debut there is an impending sense of doom. Maybe the next one won’t be as good? How can it be with such a great start? Thankfully Oliver Stark has not only produced a great debut, he has produced a second book that is equally as good.

I downloaded the Kindle version and didn’t realise that his second book is no less hefty than the first coming in at just under 500 pages. His first book introduced us to the two characters featuring in this story also. Denise Levene is a psychologist that was previously treating Tom Harper. Tom Harper is a copper that has a talent for catching the most evil of criminals. Both characters I fell in love with last time as they were a little different from the normal stereotypical characters. This time around we see them following the harrowing incident in the last book.

What I loved about the characters themselves is that Oliver Stark hasn’t pretended the characters are indestructible. In the beginning of the book we see both Tom and Denise struggling with their demons after the fall out of the last serial killer they were up against. It makes the characters a lot more likeable as they aren’t perfect. Sadly the two of them don’t have time to reflect for too long as before long they are drawn into the three cases that at first glance seem unconnected.

As with his last book I found the beginning a little slow to start. However, after reading two of his books I realise that this must be a style for him, where he starts off with the background and slowly make the pace pick up speed until you are unaware how fast you are reading!

The crimes and crime scenes are gruesome and extremely descriptive and you get a real feel for what is happening. After the first third of the book I was reluctant to put this down. If you didn’t know it you may mistake the author for being American as he gives a great backdrop for the American setting. He also doesn’t make it to easy, you really get an understanding that solving cases is not easy and that the characters make mistakes as well as having to really work to fit the pieces together.

This book is again a true testament to a fantastic new author; a man that has a real talent for this genre and I would highly recommend.