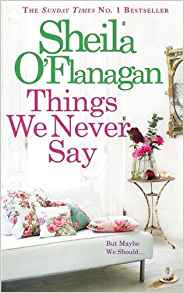 I was so lucky to receive an early copy of the new Sheila O’Flanagan book. Her covers are always very appealing and this one was no different. Abbey …Anderson is the main character in this story and she is the least likely person to want to change her life. However, she doesn’t realise that a man called Ryan Gilligan will come into her life and give her news that changes everything. When the Irish lawyer Ryan visits her in her home in San Francisco she realises that her whole life is based on a lie. What she needs to do is travel to Dublin to find out a lot more about what she has been told.

Now I know that sounds a little vague, but that’s the general plot of the story and I really don’t like spoilers so that is all I can really say. Abbey is an easy character to like and for the first few chapters I loved the friends and family she was surrounded with. Her relationship with her mother was unexplained, but the reasoning for that becomes evident much later on.

For some reason which I cannot put into words, this book was one that I really didn’t want to put down. It certainly wasn’t all roses for the characters and there really wasn’t a theme of `everyone has a happy ending’. Maybe this was what made me want to continue reading. Sheila O’Flanagan manages to peel away the layers of all the characters and two different families slowly. It means that as the reader you really feel like you are getting to see people’s real colours and as time went on I was swinging wildly between sympathy and annoyance at certain characters.

The second half of the book really dug into the `dirty worlds’ of everybody involved and I managed to finish the second half of the book in one sitting. I have been reading Sheila O’Flanagan’s books for as many years as she has been writing and this one is one of the best I have read of hers. IT certainly has a lot of things going on, plenty of twists in the story and enough tension to make you reach for the headache tablets. This was a story that was a little out of the ordinary, but one that I would highly recommend