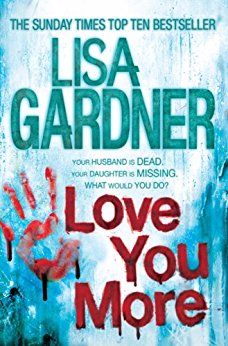 Lisa Gardner’s release prior to this one was entitled `Live To Tell’ and if I am being 100% honest it wasn’t my favourite of her books. There was a certain element of `supernatural’ to that book and it just didn’t sit right with me. Thankfully, she has returned to her former glory of producing a fantastic crime novel featuring DD Warren.

DD Warren is featured in a series of books and this latest book is number 5 in the series. Detective D.D Warren is a very headstrong woman working in a predominantly male environment. She is a tough, no-nonsense woman who seems to fluctuate between doing the right thing the legal way, and doing the right thing the illegal way. In the last book Live to Tell it seemed like DD had become this sex-starved workaholic. There was a certain element of believability about it but it seemed a little harsh for even her to become that bad. In this latest book she seems to have finally settled back to her normal self, with thankfully a man on the horizon. As well as DD being part of a murder case and missing child’s case, she also has her own personal issues to tackle which make for a great thread which can be continued on to the next book.

DD is paired up with her ex-loved Bobby Dodge on a strange murder case. Brian Darby is found dead on his kitchen floor. His wife Tessa Leoni is a state police trooper and is claiming to have shot him in self-defence. It should be a simple self-defence case but Tessa’s six year old daughter Sophie is missing. DD and Bobby soon become aware that this case is a little out of the ordinary. They are also aware that with a 6 year old child missing the clock is ticking.

Tessa has her own secrets and as such you see and hear from her as her story begins with walking into her kitchen that fateful night. Lisa Gardner has produced an outstanding book. Tessa is absolutely brilliant and you understand that this is written with the sheer though of how far you would go for your child.

The story is set into two parts that of DD and Bobby chasing the murder trail and Tessa trying to keep one step ahead the whole time. As usual I started out at a relatively sedate pace but soon couldn’t help but keep reading. The ending came as a shock (which is always nice) and as Lisa Gardner is famous for, her crime scene descriptions and gruesome murders are very descriptive. Set in harsh Boston winter I felt like I was literally running behind them ain the snow, this book was an absolute corker and I was so pleased that the author has also given us the added bonus of a new dimension for the character for the next book.

This is a brilliant book which I loved and I cannot imagine any crime fan not enjoying it. Fast paced, with lots of twists in the plot, it never stands still for a minute. Get out there and grab yourself a copy!