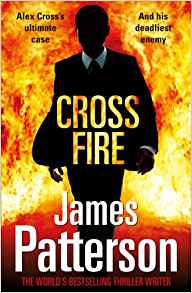 I feel a terrible burden when I pick up a James Patterson book these days. The man is a legend who has produced some fantastic work that has earned him the right to be called one of the bestselling authors of all time. A staggering figure is that in 2007 one in every fifteen hardback books sold was a James Patterson. I myself seem to have a love-hate relationship with his work.

Lately I haven’t been over enthused with any of his offerings and his best book in the last few months has been without a doubt `Worst case’ which is another popular series of books featuring Michael Bennett. It seems that all of his co-written books have been a pile of rubbish and it makes me wonder just how bad his books can get. I was however looking forward to his new release Cross Fire, his 17th in the Cross Series of books. When the book arrived my first thought was that this book would be the one that cemented my loyalty to JP and why I always pre-order his books no matter how disappointed I was with the last one.

In this latest instalment we again get drawn straight in at chapter one. JP’s infamous style of his short sharp chapters is there in abundance, which I confess I love. Alex is written exceptionally and as soon as you pick the book up you feel like you are getting reacquainted with an old friend. Nana is also still around as are the kids and you felt like you are once again part of the Cross’ hectic family life.

The story itself is the major let down for me. James Patterson in the past has come up with storylines that have had me staying up overnight to finish a book or being so engrossed that I miss my train stop. This book is certainly not up to what I would call his best standards. I thought the plot jumped and many of the chapters felt almost unfinished.

We see the re-appearance of an old adversary in the form of Kyle Craig. I was looking forward to this element of the story as you feel like you have seen Alex’ life up close and personal in all of his books. For me the first half of the book featuring Kyle Craig was okay but the second half was abysmal. It felt rushed and unfinished and had an element of laziness to it.

Overall the book was very average and again I finished it feeling that dreaded sense of disappointment returning. I don’t know why his books just don’t seem to hit the mark anymore and I find myself wondering if Alex Cross is running out of steam. In comparison his Michael Bennett novels are picking up pace and fast becoming favourites of mine. All in all, if you are expecting another corker in the Alex Cross series you may be disappointed.