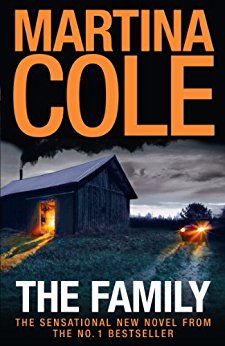 Martina Cole used to be one of my favourite authors until recently. Hard Girls was an awful read and The Business was even worse. I was convinced that Martina Cole had lost her skill however I am pleased to see that maybe there is a light at the end of the tunnel. Don’t get me wrong, this book was not in the league of the books from her early days such as Ladykillers, but it was a massive improvement on her last two books.

Early on we are introduced to the Murphy family and we meet Phillip the head honcho. He emanates the self importance of being the leader of such an influential crime family. We meet Phillip and his family along with Christine very early on and learn how the family all came to be in a position of such importance.

I liked the fact that the book is set over many years with the early introduction of how Christine and Phillip met and the sort of woman Christine was. We see their love affair turn to marriage, children and lastly the solid family Phillip wants and expects. Phillip is the eldest of the children in the family and although the main story leads with him we get to see the effect he has on his brother Declan and sister Breda. They are both part of the family business and as such get caught up in all the drama.

The story itself was a vast improvement and it was a pretty fast paced read. There is lots of action and business very early on and the tension runs high in the book which I loved. Martina Cole has also slightly changed her chapter style for this book with many shorter chapters as each persons role and situation changes. I wouldn’t necessarily say this was a bad thing and I think it helped highlight certain key situations.

I liked the characters she created and loathed Phillip Murphy from the outset. Although I must admit that Christine just wasn’t a strong enough character in my book. She is the woman that is put into a situation where she no longer recognises the man she has married. This was a major opportunity in my opinion to develop her as a woman and to fight back. However, this doesn’t really seem to happen and she just drowns her world in drink and prescription pills.

The story itself is a typical crime and underworld family involved in business that can and does go wrong so from that point of view it was okay. Due to the storyline and Phillip Murphy the book was a surprisingly easy read. The thing that still bothers me is that this still seems to fall so short off the mark of what she used to produce. Whether that is because there is so much competition or whether MC has lost her touch, I don’t know. All I do know is that this was much better than the last two and I can only hope that her next one is even better and maybe we will see the Martina Cole of old.