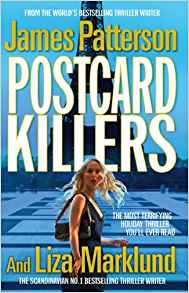 James Patterson seems to continually disappoint me these days. It’s bad enough that I hated his last two books, but this one is only marginally better. Many people are die hard Patterson fans and until quite recently I would have also put myself in that category. Unfortunately, I am now becoming very cynical when it comes to any book he has co-written.

This particular book I was actually looking forward to due to many reasons. The first is that he has never co-written with author before; and secondly because Lisa Marklund is a successful author in her own right. Once again I have been let down.

The story itself sounded pretty good from the bog standard jacket info. NYPD Detective Jacob Kanon is on a tour of some of the most famous European cities. However, his reasons for the tour are not what you imagine. His daughter Kimmy was brutally murdered along with her fiancé while visiting Rome. Since then other couples have been found murdered in many other cities. There seem to be no connections except for a postcard that is sent to a local newspaper prior to each of the murders. Jacob feels that he has to track the killers down to find himself some peach and the only way to do that is team up with Dessie Larson, a reporter that received a postcard in Stockholm.

The first few chapters are pretty good with non-stop action from the killer and the detectives. Gruesome crime scenes and the police scratching their head is the general theme of the story in the beginning. This book actually had the potential to be really good.

Sadly, both Lisa Marklund and James Patterson got bored around halfway through this book and decided to slow the pace and the storyline at the same time. The story itself was okay, but it seemed to become more lacklustre the further into the book you got. The main character Jacob was not the strongest character I have read, but by no means the worst either. The relationship between Jacob and Dessie was also a bone of contention for me as it was very unbelievable and stilted.

Besides Jacob and Dessie, the only other characters that the reader is drawn to, is that of the killers. The killers were so mentally unbalanced it was laughable. There was nothing like the connection you feel to characters when reading a Cross novel. This is one of the major factors that is turning me rapidly into a Patterson turncoat.

I still pray that when the next Cross novel is released by Mr Patterson alone that I will take back all my words of criticism and be a number one fan again. I think that overall Patterson fans want just that, Patterson and Patterson alone. Leave the co-writing alone for a while!