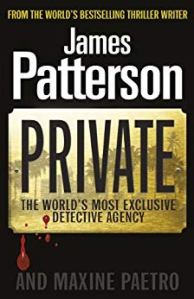 I finished James Patterson’s co-written book `Don’t Blink’ a couple of weeks ago and thought that I would never be able to read a book as bad as that with his name on it. Boy was I was wrong!

First off there are so many plots and sub-plots that you’re constantly thinking “Who”? That’s just the first gripe. The story itself is told in such a manner that it is almost rushed. You never get to connect with any of the characters because they don’t appear for long enough.

Plot wise you would think that a school-girl serial killer and Jack’s best friend being murdered would be enough but clearly not for James Patterson and Maxine Paetro. In addition to this we see Jack’s twin brother in trouble because he owes the Mob $600,000 as well as American Football Referees fixing matches. In my eyes this sort of level of plot detail is far too much for the style of writing many of his fans are used to.

Jack is the main character and all we seem to hear about is his war-torn past. Now don’t get me wrong if it’s relevant to the character and/or story then fine, but this just seemed to come across as rambling at times.

In addition to the plot and character problems there is the believable factor. I am fully aware that any fiction novel, especially one with James Patterson as co-writer, will have a certain element of things that are slightly outside the normal realms of life. However, this book really went overboard with the mention of a crime lab owned by Private that is better than the FBI has?!? There are also a number of scenes where Jack randomly turns up at the home of one of the leading figures of the Mob un-announced. I think there was too much of this type of scene which took it from being over the top to laughable.

There are very brief moments where we see Jack’s love life come to the forefront. Unfortunately for the ladies in question it is so brief that they probably weren’t even aware of it. The story felt rushed, incomplete and totally ridiculous.

All in all I was AGAIN disappointed with a James Patterson book. I still debate in my own mind whether the reason is because JP doesn’t contribute to the co-written books that much, or whether I am just tiring of his work. I think it must be the former as recently he has produced a reasonable offering with Worst Case featuring Michael Bennett. Like a fool I have pre-ordered his next book due Postcard Killers which is a co-written book due for release early September 2010. I am pinning my hopes on this particular one a little more as Lisa Marklund is the co-writer and as I understand it, has not co-written with JP before.