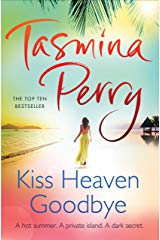 As usual when I receive a Tasmina Perry book I prepare myself for the sheer weight of it as all four of her previous novels have been hefty. This current one was no different and I was eager to get started.

We meet four very different characters in this story that will sway your perception of them very early on. Miles and Grace Ashford are brother and sister and could not be more different. They are spending their summer on their parent’s private island and have both come to enjoy the summer. Miles has brought his friend Alex Doyle along who is almost like the class geek, but they have somehow become firm friends. Along with Alex is Sasha Sinclair who is currently dating Miles and has her eye on becoming the future Mrs Ashford.

The book is written in stages and we see the story from that first summer in 1990 where all four of them become part of a dark secret that they will all carry with them. Each of them goes their separate ways and the book progresses with each of them over the next twenty years bring us to the finale set in 2010.

As usual Tasmina Perry has surpassed my expectations and produced a first class book which is everything you want from a great Chick Lit novel. The story itself was so well written with the progressing years for each character. We see snippets of each of their lives and how their successes are affecting each of them. Their lives cross many times over the years and that dark secret is the cause of pain and suffering for all of them in one sense or another.

The characters are written with such insight and I found myself loving Alex and Grace almost as much as I disliked Miles and Sasha. The story was a great pace and each little nugget of information relating to the past kept me curious about the original incident until the very end of the book.

Although the story is considered Chick Lit, I loved the fact that there was a very dark side to both the story and characters. There was also a very surprising twist at the end which was very discreetly hidden and made perfect sense once the story was complete.

Although this book was hefty I devoured it over a day and a half. All the key ingredients for a great chick lit book were in here, glamour, tragedy, success, power and sex. Yet again Tasmina Perry has produced an absolutely brilliant book and right now I cannot think of many authors that write as well as her consistently. Each of her 4 previous books has rated no less than 4 stars on Amazon and in my opinion that rating is well and truly deserved. If you have never heard of her and like this genre of book I cannot recommend her highly enough.