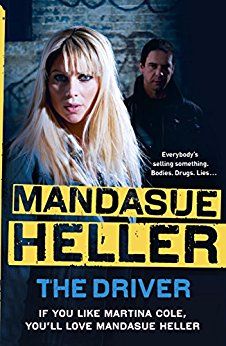 The Grange Estate is known locally as a `rough estate’ and Joe Weeks has just moved in. Joe is laid back but is quite eager to make friends with his neighbours. He meets Carl and Cheryl and before long he is one of them. With their regular parties and weed smoking, Joe fits in a treat.

Eddie Quinn also lives on the estate and is known as the hardest man around town. He is also living from his reputation which is one that you don’t wish to cross. When Joe is asked if he wants to work as Eddie’s driver he jumps at the opportunity. Joe soon runs into Katya who is a very frightened prostitute who is trapped as a practical slave and wants nothing more than to escape from Eddie. Joe soon gets drawn into a dangerous life surrounded by death, drugs and prostitutes.

Well first off I have to say I was shocked at the small offering that arrived when the book turned up. I am used to receiving a Mandasue Heller book that is a hefty offering as opposed to this slimmed down version. I picked up the book hoping that this one was better than her last book as I wasn’t that impressed with it. Initially the first few chapters seemed to be going well. We get introduced to Joe and get to know the goings on of all the people who live on the estate. Joe as a character isn’t the strongest Mandasue Heller has ever written but he was a likeable guy.

We also see the bad guy Eddie who again I didn’t think was that strong a character. Yes he seemingly had the right ingredients, the build, the attitude and the hard man look about him. Unfortunately that was all he had! Around the halfway mark I was beginning to wonder when the gritty storyline would jump in but sadly it didn’t materialise. The book wasn’t an awful read by any means it just wasn’t particularly strong or memorable.

The last portion of the book saw a rise in tempo slightly but it had an air of `unfinished business’ about it. In actual fact this was how I felt about 90% of the book. You felt like you got to know the people involved but beyond that, nothing. I have read all of Martina Cole’s books and felt bitterly disappointed that her more recent stuff was nowhere near as good as her original works. Sadly, it seems that Mandasue Heller is suffering the same fate. The storyline felt very lacklustre and had no real oomph in it. In addition to this, nothing that drastic or meaningful happened. I can tell from the writing style that Mandasue Heller still has a great writing style, but sadly the plot and characters are seriously lacking her usual standards.

I was bitterly disappointed with this and was hoping that we would see a return to her previously wonderful writing. Although the writing is there, it seems that nothing else is there with it. If I am being honest I wouldn’t recommend this particular book of hers and would say try her earlier works which were brilliant. I can still live in hope that she will return with a vengeance with her next book.