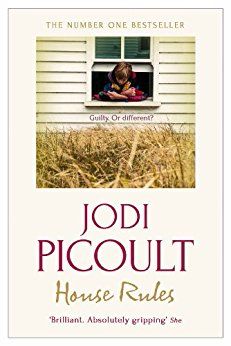 Jodi Picoult is an author that I, like many others, are very aware of and the majority of her new books seem to be very popular. However for some reason I have never gone out of my way to ever read any of her work. When this book landed on my lap I was genuinely intrigued.

Jodi Picoult has been publishing books since her debut novel `Songs of The Humpback Whale’ in 1992. Since then she has gone on to write a further 16 novels including her latest `House Rules’ which was published in May 2010. Her books are translated into 34 languages in 35 countries and 3 of her books have been made into television movies. More recently her book `My Sister’s Keeper’ was turned into a big screen release starring Cameron Diaz.

Like I said previously I was intrigued by the jacket detail of this book as Jodi appeared to be focussing on a subject that I am sure many people have never heard of. Asperger’s Syndrome. Jacob Hunt is 18 and looks just like any other 18 year old boy. The difference is that Jacob is not like any other boy in his town. He lives with Asperger’s which is a form of autism. Jacob tends to fixate on certain things and his most current fixation is Forensic Science. He avoids eye contact, will only eat certain colour foods on certain days and has an almost photographic memory. His mother Emma not only has to deal with Jacob, but has to raise her other son, 15 year old Theo, on her own as a single mother. Jacob regularly turns up at crime scenes where he offers unwanted advice to the police about the forensic tests they should be running. One day, Jacob returns home from his meeting with his social skills tutor and is behaving oddly. His mother Emma finds that when the police turn up on her doorstep they only have bad news to give. Jacob’s tutor Jess was found dead and now they want to question her son about what had happened. All of the innocent traits associated with Asperger’s, like not looking somebody in the eye; now all seem like the signs of a person who is guilty. Emma, Jacob and Theo are thrown in at the deep end and have to fight to prove his innocence.

I admit I had never until reading this book, heard of Asperger’s Syndrome. Of course I had heard of autism but not of this individual type. The story is written incredibly well and we are introduced to Jacob with a wide understanding of his individual quirks and traits that come with his syndrome. I couldn’t help but grow to like Jacob and his quirky ways. Jodi Picoult introduces each character by chapter and along with that she changes the typeset so that it is very clear which character you are following.

Each character is written with feeling and compassion, to the point that even as they are making bad choices you can’t help but feel for them. Along the way we meet Rich who is the Detective in charge of the murder of Jess as he tries to catch who he thinks is the right killer. We also meet Oliver who is a lawyer who is just starting out. Oliver becomes not only their lawyer but an integral part of their lives. He gets to see the Hunt family day in day out and in all kinds of situations. He witnesses Jacob’s `meltdowns’, where he cannot cope with a situation and has to be coaxed out of it by reciting movie quotes or singing Bob Marley. The book is incredibly well written due to not only the talent of the author but the compassion she shows in writing about subjects that are open for debate. I found to my surprise that I was over halfway through the book and I still had no real idea of what had happened, I just felt that I knew the characters that bit better. As the book progresses through the second half we are drawn into the court case that the Hunt’s have to prepare for.

Overall I actually enjoyed the book and the story it told but was extremely let down by the ending. I actually visited her website after I finished her book and had a browse at her other books. It seems that she writes about subjects that are extremely sensitive or subjects that are currently being debated in one way or another. I am not saying I didn’t enjoy this book, it’s just that I question it when an author produces books that only cover sensationalist subjects. I think that Picoult fans will not be disappointed however can’t say that I would rush out to pre-order her next book.